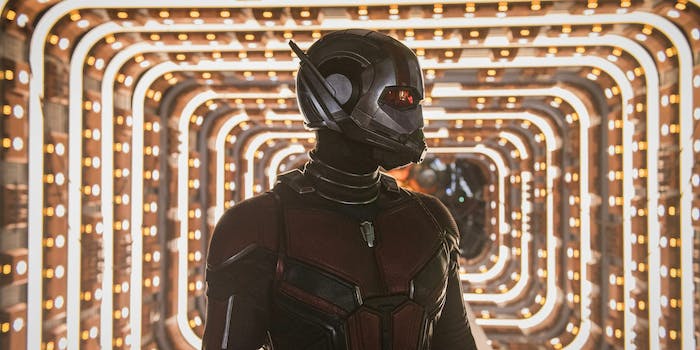 The ‘Ant-Man and the Wasp’ post-credits scene, explained

Here's how it ties into at least one future Marvel movie.

Warning: This article contains spoilers from Ant-Man and the Wasp.

Ant-Man and the Wasp is a largely self-contained film (apart from a few nods to Captain America: Civil War), but the post-credits scene devastatingly ties it to the Marvel Cinematic Universe and includes plenty of potential implications for future films.

For most of its characters, Ant-Man and the Wasp ends on a happy note. Scott Lang is done with his house arrest, Scott and Hope van Dyne get back together, Janet van Dyne is reunited with her family, Ghost receives enough quantum energy from Janet to stabilize, and Janet and Hank Pym have a house on the beach. It’s a much calmer ending than we’re used to seeing, and it’s almost enough to make audiences forget how Avengers: Infinity War ended for a couple of hours. Almost.

Because when Thanos snapped his fingers to wipe out half the universe, that meant the universe within Ant-Man and the Wasp went too.

The post-credits scene reunites Scott Lang with Hank, Janet, and Hope as Scott prepares to head into the Quantum Realm through a tunnel small enough to fit into the back of a van. Scott’s making the trip to collect “healing particles” for their “ghost friend,” and the plan is for him to go in, get what he needs, and leave. Janet warns him to avoid the tardigrades and any kind of “time vortex” he might find in there.

The trip into the Quantum Realm goes off without a hitch, and Scott quickly gathers what he needs. But just before he can be pulled out, the communication cuts out. When we look back at the real world, Hope, Hank, and Janet have all turned to dust while Scott is trapped in the Quantum Realm, with seemingly no way to get out. The fates of other supporting characters such as Scott’s daughter Cassie, his ex-wife Maggie, her fiancé Jim Paxton, Luis, Ghost, and Bill Foster are currently unknown.

The second post-credit scene alleviates what we just saw, but only by a little. You catch a glimpse of the aftermath of Thanos’ snap at Scott’s abandoned house (and the sirens you can hear in the background), but there is at least one other survivor: the ant who wore Scott’s ankle bracelet during the film, and it has taken over playing the drums.

With the Infinity Stones at his disposal, Thanos could move people around, fiddle with space and time, and deceive his foes with illusions. What’s less clear, at least right now, is the limits of his power.

He can manipulate objects and atoms alike—easily changing projectiles into bubbles to the detriment of the Avengers—but how does that work on the subatomic level that Scott is operating in when the snap occurs? Is Scott simply too small to be affected by the power of the snap? Or would have have been one of the heroes spared by the Mad Titan’s wrath?

Regardless, Scott is among the superheroes who survived Avengers: Infinity War—on top of the original Avengers, Nebula, Rocket Racoon, Okoye, M’Baku, and War Machine—and is likely to play a role in Avengers 4.

Scott appears to not only be unaffected by the snap, he has no idea what just happened on Earth and the universe at large; for all he knows, there was just a communication snag and he’ll be yanked out at any second.

As far as we know, Scott doesn’t have the technology on him that allowed him to travel back from the Quantum Realm the first time. So unless he has that technology or someone brings him back manually, he could be stuck there for the foreseeable future. But there could be another option for his escape.

Janet van Dyne’s advice to Scott to avoid a time vortex was casual, but its inclusion in a post-credits scene is anything but. Little is known about the time vortex itself, but it could allow Scott to travel in time or give him a way out of the Quantum Realm. It could also tie him back into the thick of it much sooner than we thought.

We already know that the Quantum Realm will play a role in Captain Marvel, although the specifics are under wraps. It could be possible that either Carol Danvers enters the Quantum Realm at one point—perhaps even getting stuck there, which could explain her absence from the Marvel Cinematic Universe—or Scott somehow ends up in the ’90s when Captain Marvel takes place for a time.

In Avengers 4, the possibilities are even more endless. If Thanos cannot use the Infinity Stones in the Quantum Realm, it could be a key advantage for the remaining Avengers in the fight ahead—as well as in the quest to get all of their loved ones back. With multiple scientists among the survivors (possibly including Shuri), they might be able to extract Scott from the Quantum Realm, especially if they know where to go.

But one way or another, Ant-Man will likely join forces with the Avengers again. Because they’ll need all the help they can get.