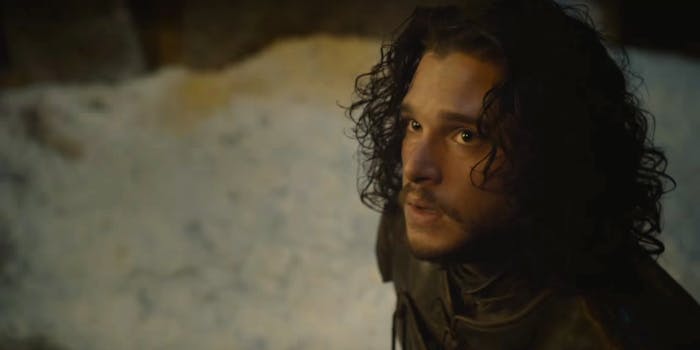 The death of the TV twist

What is dead may never die.

One of the biggest twists in Game of Thrones may have been revealed well before it will ever air on TV.

The Internet has obsessively kept track of Kit Harington and his hair’s frequent visits to Belfast, Northern Ireland all summer while Game of Thrones films its sixth season, but the latest report from set leaves the idea of Jon Snow’s fate almost certain in many fans’ eyes. The Daily Mail reported Friday afternoon that Harington was spotted on set in Belfast—and in costume.

For Game of Thrones fans keeping tabs on filming progress over the past few months, this isn’t exactly new; similar reports of Harington taking part in a big battle scene came out just a couple weeks ago. But this time there were pictures. Grainy pictures taken from a distance, yes—but Harington’s man bun is unmistakable.

Astute fans will also notice another big reveal: Jon’s not wearing black, which he wore as a brother of the Night’s Watch. His outfit is gray, although the quality of the picture makes it difficult to tell if it’s regular Northern clothes or the gray of House Stark.

And it’s incredibly difficult to argue that Jon’s presence in gray is a flashback or one of Bran’s visions; he was never in a battle while he still lived in Winterfell.

While more people doubt that Jon is truly dead by the day, it would’ve been a huge reveal on the show if Jon was alive and wearing the Stark colors (or fighting under Ned’s banner) instead of the same black clothes he’s worn off and on for five seasons—if it happened on-screen. But instead, many people—and a bigger audience than just Game of Thrones fans who frequent fan sites for this kind of information—will find out from a grainy photo, thanks to a mainstream publication and Facebook trending topic.

The conversation about spoilers and whether or not they’re terrible is one for another day. But the losing battle HBO faces in keeping Jon Snow’s (at this point) inevitable return a secret demonstrates a couple things. One, it’s only going to be harder to pull off a truly great twist in TV without it leaking online beforehand. And two, maybe don’t speak about a character’s fate in absolutes even if it’s technically true.

Just last week, Doctor Who actress Jenna Coleman announced she would be leaving the show—but it came after rumored reports that she left in order to play Queen Victoria in a TV drama. While initially the decision to announce a Doctor Who exit occurred because of a “blunder” on the BBC’s part, it eventually became commonplace. It allowed fans to be able to prepare for a beloved character’s exit, but those reports still leak beforehand. Steven Moffat’s other show, Sherlock, has a dedicated group of fans who go to the set to report on filming progress. David Lynch recently asked fans to stop tweeting details from the set of the Twin Peaks reboot. It’s an occasional hazard of filming, particularly when it’s done in a public setting.

On the movie side of things, Ghostbusters director Paul Feig confirmed Sigourney Weaver’s cameo—one of many from the original film—on Twitter because it was about to leak. And photos from the set of Captain America: Civil War leaked the entire time the movie was filming.

Unless that twist is filmed inside of a studio with the tightest security measures available to major TV and film studios—something that’s not always possible, especially on a show like Game of Thrones—it’s probably going to leak. And even then it’s not always a guarantee it’ll stay under wraps.

But on the other hand, Game of Thrones producers, directors, and cast members have been publicly declaring that Jon was dead ever since his death scene in “Mother’s Mercy” aired in mid-June. It might be true right now—at least until he’s possibly brought back to life—but it’s still leading people such as Film School Rejects’s Neil Miller to call the whole charade of maintaining that narrative a “parade of lies.”

Game of Thrones showrunners said Jon was dead. “Mother’s Mercy” director David Nutter said it at San Diego Comic-Con, and even told President Obama. Harington said himself that he’s “not coming back next season”—something his presence on set in Jon’s costume clearly contradicts. HBO programming president Michael Lombardo told an audience of reporters that Jon is dead, and Harington’s fellow Game of Thrones stars are still getting asked about it on the Emmys red carpet more than three months after the episode aired.

And the photos probably would’ve leaked anyway, but HBO might not have had nearly the migraine it does about Jon Snow now if it had left Jon’s death in the show the cliffhanger it was in the books.

Would it have stopped any of this? Probably not. Fans would still speculate and search for him on set like hawks, although Harington probably wouldn’t have had to deal with nearly as much paparazzi-like tendencies from some fans or have his hair scrutinized at every turn. The question wouldn’t be how HBO lied to the fans but potentially speculation on how Jon gets out of this one.

Last year, I saw the Orphan Black premiere a couple days before it aired on TV. It had a similar twist: a character everyone said was dead was very much alive. The NDAs at the screening (along with Tatiana Maslany playing half a dozen characters) helped, but it didn’t get out to fans until it aired; it’s also a show on a much smaller scale than Game of Thrones.

Even though George R.R. Martin is still letting us know about Harington’s work schedule, chances are, Game of Thrones will pull this off. There are plenty of fans who have no idea about Jon Snow’s fate or #KitHaringtonHairWatch. But the reality is, the days of truly pulling that twist for everyone are far behind us.