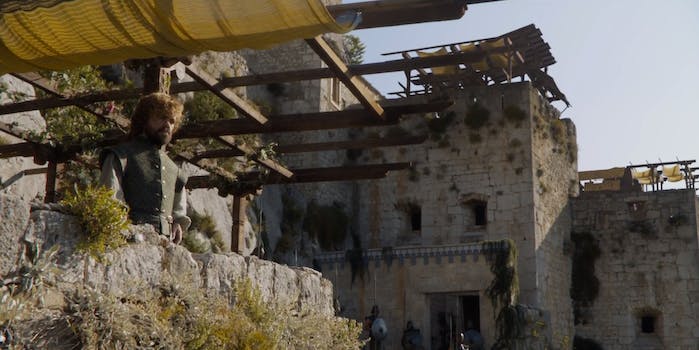 Some are satisfying, but others are much more devastating.

The fifth season of Game of Thrones just ended and it’s pretty much guaranteed fans will dissect the potential consequences of the “Mother’s Mercy” episode for months to come.

We didn’t get that title reveal after all, but in its place we had some calmer moments, some revelations, some revenge, a mutiny, a battle, a walk, and death. So much death; the Many-Faced God should’ve gotten more than enough payment for Arya taking another name off her list.

And as the credits rolled, we collectively sat there stone-faced with that final image etched into our minds. We were not ready.

GAME OF THRONES finale: that was…was…let me just say it was not what I expected. :-(

Game Of Thrones has me feeling some type of bad and confused way. Why, why must you break my heart. #GoT pic.twitter.com/TCKu98SR4J

Game of Thrones is savage pic.twitter.com/0wNDaCdibJ

We were still reeling after Shireen’s death in “The Dance of Dragons.” Instead of giving us time to breathe, we saw plenty more death and devastation; that last one was particularly brutal. But what does it all mean in terms of the show and the books?

George R.R. Martin has yet to announce a release date for The Winds of Winter. The already-published books in A Song of Ice and Fire offer a little more plot for season 6, but for the most part we will have no idea what’ll happen the next season unless the book comes out first.

And if these characters are dead (and stay dead) in the books, there’s no telling how big an impact it’ll leave on the story left to tell.

The deaths came so fast in the season finale, it’s easy to overlook their true impact. So let’s review:

Cause of death: Hanging

Is she dead in the books? No

Selyse helped kill her only daughter just last episode. Although some people wondered if she even felt anything but disgust and disappointment in Shireen, she proved in the end that she had motherly feelings after all. Only, it was too late, and her grief likely drove her mad (and to her own death).

She’s not a major character in the books, but if we are to presume that Shireen dies in a similar manner in the books, her mother won’t take it well. And neither will Stannis.

Cause of death: Battle wounds

Are they dead in the books? No (we think)

In The Winds of Winter the battle hasn’t even happened yet (nor have most of Stannis’s men abandoned him), but according to the pink letter Ramsay Bolton sent Jon Snow, the battle is over and Stannis is dead. If this is the case, the North still has the terrible reign of the Boltons to dread. And if this is what we have to look forward to reading? We might need a strong drink to get through it.

Cause of death: Justice from Brienne of Tarth.

Is he dead in the books? No, unless Ramsay is telling the truth

We don’t see Stannis’s death, with the show cutting out just as Brienne makes the final blow—a  rarity for Game of Thrones. But Brienne also came across something she didn’t expect when she probably imagined getting revenge for Renly Baratheon: a broken man. His wife’s dead, his daughter’s dead (and he killed her for nothing), Melisandre abandoned him, and his army was destroyed by the Boltons. He’s got nothing.

“I think, in a way, Brienne showing up to kill him was a welcome relief,” showrunner Dan Weiss said.

But we also see another thing, albeit one less evident by the show scene: the Baratheons, one of the major families of Westeros, is completely wiped out. Tommen—the last man carrying the Baratheon name—is a Lannister, through and through. Will we see that happen with the other major families before it all plays out?

Cause of death: Pushed over a ledge by Theon Greyjoy/Reek

Ramsay’s a little busy right now, so his lover’s death will likely go unnoticed for the time being. What’ll be more important for Ramsay in the long run? His wife and his Reek have gone missing and he wants them back. With Stannis gone we can only wonder who Sansa and Theon will run into next season.

Cause of death: Revenge and gratuitous stabbing by Arya Stark

Is he dead in the books? No

Meryn’s death is likely a stand-in for the Night’s Watch member she killed in A Feast for Crows for abandoning his post, but the outcome is the same: She is blinded for her actions.

Will there be any response once Mace Tyrell returns to King’s Landing? With two queens being tried by the High Sparrow and the Faith of the Seven? Not anytime soon.

Cause of death: A deadly kiss

Is she dead in the books: No

Implication: Big in the show, nonexistent in the books

Oberyn Martell told us that Dorne doesn’t hurt little girls, but that doesn’t include Ellaria Sand getting revenge for her lover’s death. Myrcella did nothing wrong, she was just collateral damage. And she just had a big bonding moment with her uncle/dad about how she was OK with being a product of incest.

While she’s a minor character and not really a player in her own right, she’s Tommen’s heir. His only heir. Chances are, King’s Landing may go to war with Dorne over it, and with Trystane traveling with Jaime, they’ve already got themselves a hostage. Of course, in the books Jaime doesn’t go to Dorne, so none of this happens. But Dorne is planning something big, even if it hasn’t fully come to fruition yet.

Cause of death: Mutiny by the Night’s Watch

Is he dead in the books: WE DON’T KNOW

Implication: So big I wrote a giant feature about it

In the end, Jon was a Stark through and through—no matter who his parents were. And as with both Ned and Robb, it likely got him killed. What’s worse is his brothers lured him into a trap by telling him a wildling knew his uncle Benjen’s whereabouts. And we saw every single stab. Olly, saddest of them all, gave the fatal blow.

With Samwell Tarly and Gilly already heading toward Oldtown and the wildlings hopefully as far away from the Wall as possible, we have nobody we care about at Castle Black except for Ghost, Jon’s direwolf. We hope he gets his revenge next season.

Jon’s fate is still up in the air in the books, but as far as the show is concerned, Jon is dead.

“We would hope that after seeing the scene and the way it’s shot that the answer to that will be unambiguous in the minds of the people watching it,” Weiss told Entertainment Weekly. “It should be pretty clear what happens by the time you’re done seeing that scene. It’s not an, ‘Oh what just happened scene?’”

So none of it matters. R+L=J, any alliance between the Night’s Watch and the wildlings, Azor Ahai, the three dragons, nothing. Dead is dead. Jon isn’t the only one who knows nothing.

.@GameOfThrones If I wanted to watch week after week of false hope, misery and ever-present, never-ending dread I have my own life.