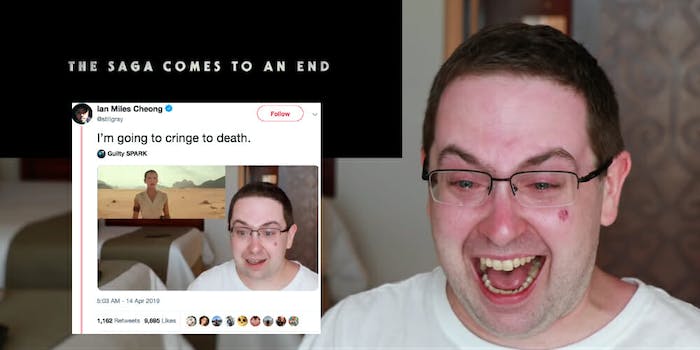 Popular right-wing figure Ian Miles Cheong this week made fun of a YouTuber who got emotional while watching the new trailer for Star Wars: The Rise of Skywalker. The post backfired on Cheong, as many were quick to rally around the Star Wars fan.

“I’m going to cringe to death,” Cheong tweeted along with a snippet of Eric Butts’ video.

Cheong told the Daily Dot that he stands by his post and would do it again, despite the backlash.

“I wouldn’t be a commentator if I kept my opinions to myself,” he said.

Mark Hamill, who plays Luke Skywalker in the film series, came to Butts’ defense and later offered him some encouraging words.

“Why anyone would ridicule someone so passionate and clearly enjoying what he’s seeing is beyond me,” Hamill wrote on Twitter.

Hi Eric- Thanks for sharing your amazing reaction to the trailer. It was inspiring to see you transported with joy in anticipation of IX. Makes what we do seem all the more worthwhile.
All the best, Mar🐫
PS: I salute you, sir: pic.twitter.com/7xOEVm3iju

Cheong, who is also a Star Wars fan, said that Hamill’s post doesn’t surprise him.

New York Comic Con also continued to encourage Butts and any other super fan out there like him.

Yes, you who cries over a Star Wars trailer. Who wishes the Avengers were real. Who stays up late reading comic books.

You're great & when someone tries to make you feel less than that, remember there's a community of geeks who are with you. Keep doing your thing. https://t.co/kaEQcUimxP

Others on Twitter also came to Butts’ defense, calling Cheong an “asshole” and “dumbass” while offering supportive words to Butts.

Yeah that’s what I was gonna say. It’s beautiful seeing someone express this much joy in something.

“I just want to thank everyone for the incredible amount of love and support they’ve been showing,” Butts told the Daily Dot. “I am terribly happy by all the joy I seem to have brought a lot of people.”

“I’m not taking away this man’s joy by cringing at it, or even admitting it’s how I reacted to his video,” he said. “I would say to the people calling me an asshole that they’re free to express whatever they feel.”

There has been speculation that Butts initially posted the video to Steam and later deleted it out of embarrassment. But Butts told the Daily Dot that he only ever uploaded it to YouTube.

“They pirated two minutes out of my 9-minute video,” Butts said. “So, they also stole a ton of ad revenue, but it’s worked out very well for me, and I’m not going to complain.”

“They’ve given me so many YouTube views I just bought a new Lightsaber… while wearing my cargo shorts!” Butts said.