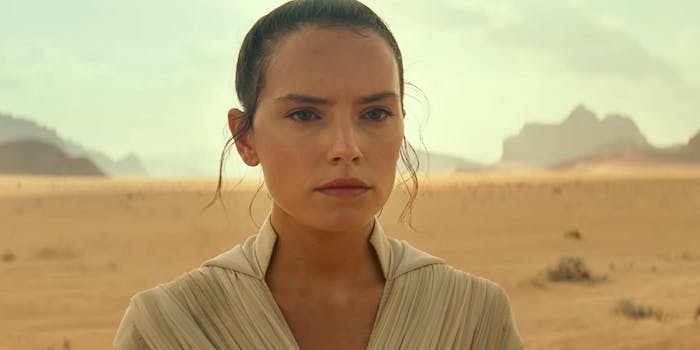 'It had to be a satisfying conclusion.'

Ever since J.J. Abrams took over directorial duties for Star Wars: The Rise of Skywalker, avid fans have been wondering how he will handle the story revelations whipped up by The Last Jedi director Rian Johnson.

In the wake of The Force Awakens, numerous fan theories estimated that Rey’s mysterious parentage would play a key role, leading many to conclude that she was secretly a child of either Luke Skywalker or possibly even Han Solo. The Last Jedi undercut this when Kylo Ren told Rey that her parents were really just nameless addicts who sold her off for more drinking money, challenging the well-worn “chosen one” trope. In an interview with ABC News, Abrams has now teased that there may be more to Rey’s origins that will be explored in The Rise of Skywalker.

“I will say that we knew, going into this, that this movie, it had to be a satisfying conclusion,” Abrams told ABC. “And we were well aware that that’s one of the things that’s been out there. I don’t want to say that what happens in Episode 8 [didn’t happen]. We have honored that. But I will say that there’s more to the story than you’ve seen.”

Fan theories abound for The Rise of Skywalker and what that title may mean for its cast of heroes and villains. Some theorize that “Skywalker” is being used as a more general descriptor for people in the Star Wars universe awakening to their Force powers, just as we saw at the end of The Last Jedi, rather than an explicit reference to the Skywalker bloodline rising up to even greater prominence through Rey or Kylo.

Abrams is also just known for taking more straightforward routes with his films, as evidenced in The Force Awakens, which many criticized for recycling A New Hope’s story beats.

At the end of The Rise of Skywalker’s teaser trailer, we also see Rey, Finn, Poe, and others arriving at what can only be the wreckage of the (most likely second) Death Star, followed by an ominous laugh that sounds an awful lot like Emperor Palpatine. This all goes to show that the past, present, and future of the Star Wars universe will be clashing in some significant way.

In any case, The Last Jedi director Rian Johnson doesn’t seem to have any problem with Abrams retooling parts of the story established thus far.

I LOVE EVERYTHING ABOUT THIS and I just melted back into being a happy kid. If you need me I’ll be spending the rest of the day smiling dreamily. https://t.co/z8evIBbRoA