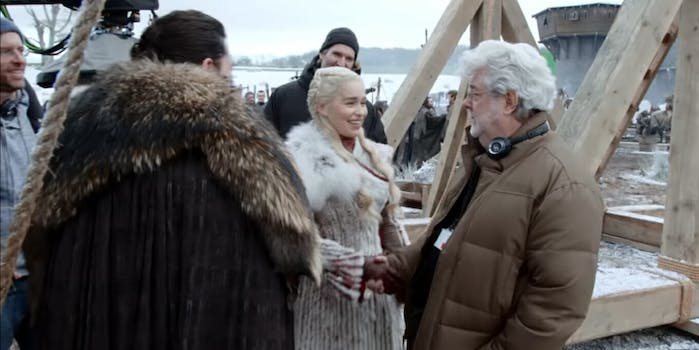 The famed director helped guide a key scene from 'Winterfell.'

Despite his partial retirement, George Lucas is still flexing his directorial chops.

The Star Wars and Indiana Jones creator stopped by the Game of Thrones set, back when the cast and crew were hard at work on the final season. In a behind-the-scenes video uploaded to YouTube, the 74-year-old filmmaker can be seen helping with the direction of a scene from the premiere episode, “Winterfell.”

“When we found out that George Lucas wanted to visit, we thought maybe it was a practical joke,” writer and executive producer David Benioff admitted in the video. “And then we were really excited, and also nervous because it’s George Lucas.”

Lucas’ surprise visit saw him hanging out with David Nutter, who directed episodes 1, 2, and 4. You might also remember him as the director of several earlier Thrones episodes, including The Rains of Castamere—better known as the infamous Red Wedding. Nutter expressed his delight at getting the opportunity to work with the industry titan. “It was so cool for me,” he said.

Nutter even had Lucas give Kit Harington and Emilia Clarke—who play Jon Snow and Daenerys Targaryen—some direction. He approached the actors after they finished an early scene in Winterfell. “OK, that was great,” Lucas can be seen telling Harington, before going on to tell him “I don’t really care about you. I don’t care what happens to you.”

At least he’s honest. And hey, now we know who Lucas is rooting for in the game of thrones, and it’s not Jon Snow.

The cast and crew were clearly giddy at the chance to share their monumental project with such a highly respected figure. “Like the first time like I could remember telling stories was me as a little kid, mashing together these Stormtrooper dolls,” Benioff said in the clip. “For so many of us, he’s the one who started our obsession with this kind of big, epic storytelling.”

Maybe we can look forward to a Game of Thrones/Star Wars crossover one of these days. For now, however, we’ll have to be satisfied with Lucas’ contribution to season 8.