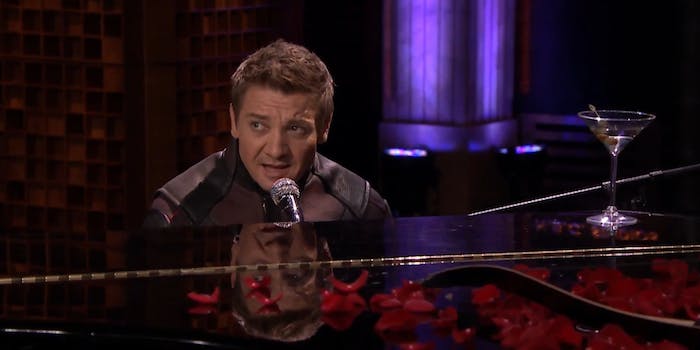 Jeremy Renner sings the story of Hawkeye on ‘The Tonight Show’

Apparently Hawkeye is the Ed Sheeran of the Avengers. Who knew?

Jimmy Fallon just gifted us with a video that should immediately be embedded into a thousand Avengers fanfics.

Marvel star Jeremy Renner visited The Tonight Show in character (and in costume) as Hawkeye to sing a superhero-themed version of Ed Sheeran’s “Thinking Out Loud.” The song riffs on the fact that Hawkeye is the least famous member of the Avengers team, a normal middle-aged dude in a crowd of superpowered heroes and glamorous billionaires.

Now we know that, in addition to being a muscular guy with a bow and arrow, Hawkeye has a rich inner life. His cat has an Instagram account. He collects scarves. He likes bowling. What a guy.

Appropriately enough for a song about Hawkeye’s secret talents, Jeremy Renner surprised the audience by having a lovely singing voice. Does he have time to fit a musical in between all those action roles?

Screengrab via The Tonight Show/YouTube