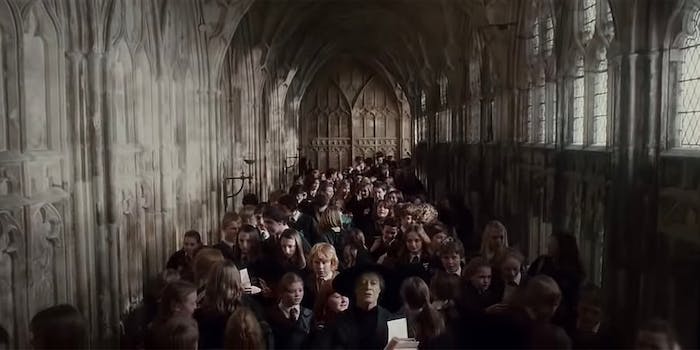 This fact about Hogwarts bathroom etiquette is pretty sh*tty

J.K. Rowling has spent the better part of a decade dropping more information and tidbits about the world she created in the Harry Potter to both excitement and exasperation from fans. That information can be useful and unnecessary, but the resurgence of one of those years-old tidbits from the dredges of Pottermore reveals the limits of just how much Harry Potter fans want to actually know about the wizarding world.

To celebrate National Trivia Day, the official Pottermore Twitter account posted a bit of Hogwarts trivia about the fact that bathrooms, which play a crucial role in Chamber of Secrets, weren’t always part of Hogwarts’ layout. You might even call it a “fun fact” until you read what the wizarding alternative was instead.

Hogwarts didn't always have bathrooms. Before adopting Muggle plumbing methods in the eighteenth century, witches and wizards simply relieved themselves wherever they stood, and vanished the evidence. #NationalTriviaDay

The reveal that Hogwarts students and professors alike did their business in the middle of the floor and vanished it might not come as a shock to those who’ve frequented Pottermore over the years. It first appeared as an aside on a Pottermore entry on the Chamber of Secrets that you could access by exploring Chapter 17, “The Heir of Slytherin,” back in 2012 when Pottermore was more interactive. Since at least 2015, when Pottermore went through a major redesign, it’s been viewable on the site directly through the Chamber of Secrets entry (the location, not the book).

There is clear evidence that the Chamber was opened more than once between the death of Slytherin and the entrance of Tom Riddle in the twentieth century. When first created, the Chamber was accessed through a concealed trapdoor and a series of magical tunnels. However, when Hogwarts’ plumbing became more elaborate in the eighteenth century (this was a rare instance of wizards copying Muggles, because hitherto they simply relieved themselves wherever they stood, and vanished the evidence), the entrance to the Chamber was threatened, being located on the site of a proposed bathroom.

But whether they forgot about that particular aspect of life at Hogwarts, or this is the first time reading it, the apparent shock reverberating from parts of the internet was swift.

THIS. THIS IS WHY YOU DON'T USE SIDE CHANNELS TO FLESH OUT NARRATIVE WORLD-BUILDING AFTER A WORK HAS BEEN PUBLISHED.

But seriously what the fuck is this https://t.co/45vcGmMYuG

I love worldbuilding more than anyone but https://t.co/ZXIaHG73fB

I'm sorry I ever bad-mouthed Rowling's incessant lore-rewriting. "All wizards used to shit themselves" is insanely good https://t.co/upNCybNhSH

This tweet is the single most convincing argument I’ve ever seen for that whole Roland Barthes “Death of the Author” theory https://t.co/Xr7lH9P3Fh

It instantly evokes the mental image of the witches and wizards who attended Hogwarts pooping in the middle of a crowded hallway before waving away the mess with a wand. They supposedly did that for centuries deciding to adopt Muggle toilets—and it’s probably not too much of a stretch to imagine some pureblood wizards holding out even longer because of anti-Muggle biases.

On the surface, it’s a quirky way to explain why the entrance of the Chamber of Secrets, a secret and long-rumored location built by Salazar Slytherin within Hogwarts before he left, ended up in a random girl’s bathroom. It also shows just how clueless wizards and witches can be about Muggle innovations.

But once you think more about it, this “fact” about the fictional world doesn’t make much sense at all.

For instance, the existence of some iteration of toilets goes back centuries—millennia, even, according to some calculations. Some wizards and witches who lived among Muggles—whether they were neighbors or had Muggles as parents—would’ve likely been aware of those methods.

Unless the Hogwarts curriculum has changed dramatically since the installation of toilets at Hogwarts, students would have been at Hogwarts for several years (where they would’ve had to use the bathroom daily) before they learned how to vanish their own waste. (The spell was taught in fifth-year transfiguration classes, according to Harry Potter and the Order of the Phoenix.) To follow that through line, does that mean it was among the first spells taught to students? And if that’s the case, what did witches and wizards who lived in toiletless homes do before Hogwarts?

Even the existence of closets where everyone could do their thing before vanishing the evidence makes more sense than people going to the bathroom in the middle of a hallway. Not to mention the sanitation issue, especially if anyone’s taking a tinkle between classes.