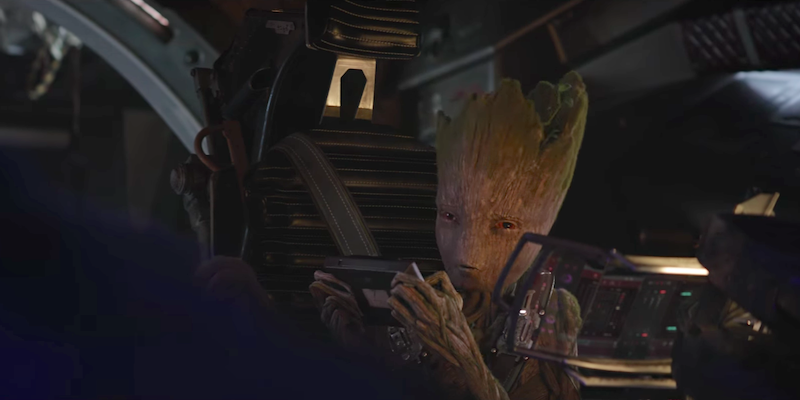 The heartbreaking truth behind Groot’s final words in ‘Infinity War’

Guardians of the Galaxy writer/director James Gunn contributed to the Guardians’ scenes in Infinity War, and that includes one of the most persistent mysteries in the franchise. We’re talking, of course, about what Groot’s dialogue actually means.

Responding to a fan question on Twitter, James Gunn revealed the heartbreaking truth behind Groot’s last line. Obviously all his dialogue sounds like “I am Groot” to us, but it generally means something else. In this case, it was Groot’s dying message.

To set the scene: This took place during the final battle sequence in Wakanda. Groot was one of several main characters who disintegrated when Thanos used the Infinity Gauntlet, and like the Winter Soldier, Groot managed to say one last line before he disappeared.

Yes, he said “Dad.” And if you cast your mind back, you’ll remember he was talking to Rocket Raccoon.

Guardians of the Galaxy worked some serious magic to make us care this much about a CGI raccoon and a tree voiced by Vin Diesel. The first movie sealed the deal by having Groot sacrifice himself for his teammates. After that, they were truly a family. Vol. 2 saw Groot return as a baby, with Drax, Gamora, Star-Lord and Rocket Raccoon as his parents. By Infinity War, he’s a sulky teen.

Before you ask, it definitely doesn’t matter that James Gunn previously said that Baby Groot is Original Groot’s genetic “son.” That’s just splitting hairs. Emotionally speaking, Infinity War confirms that Teen Groot sees Rocket as his father. Who could have guessed that Rocket would have one of the saddest character arcs in the MCU? Along with his tragic backstory as a science experiment, he just lost his entire family.

Although let’s be real here, Groot will definitely return in Avengers 4 or Guardians of the Galaxy Vol. 3. Come on.