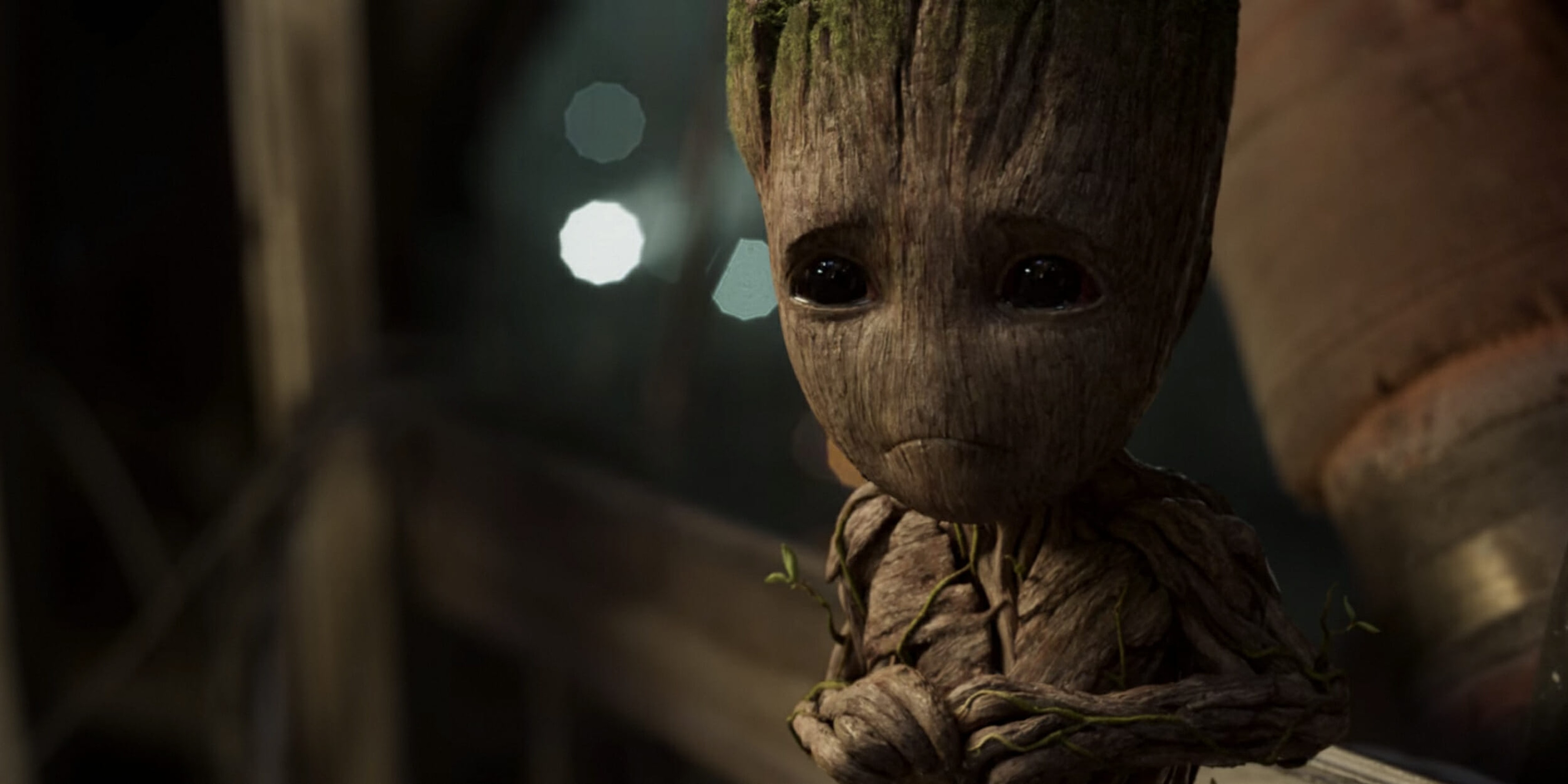 It’s been nearly 10 months since Guardians of the Galaxy Vol. 2 arrived in theaters, introducing us to a brand new, pocket-sized Groot. And as director James Gunn reminded us (to the shock of much of the internet), that new Groot is a completely different character than the character who swept us away in the original film.

The revelation came in the midst of a friendly internet debate between Gunn and ET producer Ash Crossan about which cute, computer generated sci-fi character they would save—a porg from Star Wars: The Last Jedi or Guardians of the Galaxy’s Baby Groot. Crossan, who’s one of the founders of #PorgNation, chose the porg while Gunn stuck with Baby Groot. They debated the mechanics of the thought experiment—if you saved one, did that mean that the other was doomed to die?—and after a fan pointed out that Groot came back after he sacrificed himself to save his friends, Gunn offered a clarification. For one thing, the first Groot wouldn’t have had an issue with pressing buttons.

This was something of a shocker to many fans. It made them question much of what they knew about the Guardians of the Galaxy film. They didn’t want to believe it—and it was also pretty messed up. They gasped.

And as some reminded us, it was something that Gunn has told us before, comparing the experience of seeing the reaction from fans (and the headlines that followed) to an internet version of Groundhog Day.

Thought that was pretty clear. https://t.co/xufsbLFch8

The internet is like Groundhog Day every time I point out first Groot died. Baby Groot has a different personality, a different body, no memories of adult Groot & adult Groot’s sacrifice actually meant something. New round of news stories & collective gasping again & again. https://t.co/gvx7c0g2fF

In the internet’s defense, it has been a really long 10 months, and at times it’s felt like close to a couple of years since Guardians of the Galaxy Vol. 2 came out. But also, Gunn is right. He has been telling us that Groot is dead and that Baby Groot is a completely different tree.

Gunn hinted that Groot and Baby Groot might not be the same—contradicting Marvel Studios head Kevin Feige’s thoughts on the matter at San Diego Comic-Con—as far back as September 2016. In a Facebook Q&A, Gunn called the question of whether Baby Groot was Groot’s son “complicated” and noted that Baby Groot didn’t have Groot’s memories, the latter point which he doubled down on in February and May 2017.

“Groot’s sacrifice at the end of the movie means something,” Gunn told SFX Magazine. “It’s not a meaningless sacrifice. He sacrificed himself for these people he loves. And Baby Groot is not Groot. He’s a different character and he does not have that character’s memories. He’s stupid – he’s a baby, he’s an idiot! So changing that character to Baby Groot was a hugely important element in crafting this story.”

In September 2017, Gunn reaffirmed that the original Groot was dead. It was in response to an image revealing that particular factoid about Groot and Baby Groot, and Gunn added context in how the two differed. Baby Groot, who is only a couple months old when we see him in action, is both dumber and angrier than adult Groot was.

True, essentially. What I said was Baby Groot has none of Groot’s memories (which is obvious if you’ve seen Vol. 2). https://t.co/IMpISetkri

Baby Groot is infinitely dumber than adult Groot. And his personality is different in that he’s much angrier. And he acts like a baby. Etc.

A couple weeks later, the revelation about Baby Groot returned in the midst of a debate Gunn had on Twitter about how comics, film, and TV have made death meaningless because of how often characters were revived or resurrected. When some brought up Groot as a counterpoint, Gunn reminded them that Groot was dead—and that Baby Groot was a different character.

Characters constantly dying & being brought back in comics, movies & TV makes it so that death/danger has no weight in all story – I hate it

Gunn added that in killing Groot and bringing in Baby Groot, who was a different character, he wanted to make Groot’s death and sacrifice mean something.

2/2 And of course. Groot’s sacrifice in Vol 1 has ramifications – Baby Groot is not the same character.

Gunn expanded on the idea of death and sacrifice in film in a Facebook post, adding that while you might not be able to tell that Baby Groot is a new character from a clip of a dancing tree branch, the sequel makes it much more apparent.

I also mentioned to folks who didn’t understand the original tweet and who didn’t read the follow up tweet, and who kept throwing the Groot revival in my face, that that example doesn’t really work because Groot is dead.

Although I don’t necessarily think it’s obvious in Vol. 1, it’s important to say that if you exploded and a little glob of you started growing into a baby, I would not assume that baby was you.

I do think it’s more obvious in Vol. 2, as Baby Groot has a different personality than Groot, none of his memories, and is much, much dumber.

And of course, even though I’ve said all this dozens of times before, this is what the thread largely became about, with people Grootsplaining why I was wrong and why characters I created for the screen aren’t what I think they are. Sorry, guys, it doesn’t work that way. Groot’s sacrifice, too, had weight and truth to it.

And for good measure, Gunn confirmed the original Groot’s death again a few weeks later in a debate on whether Marvel movies are “safe.”

That’s an incredibly simplistic and boring definition of risky. And Groot 1 is definitely dead.

Gunn has tackled Groot’s mortality and the growing nature of Baby Groot a lot, and chances are he’ll probably do so again if Teenage Groot reaches adulthood. But it also wouldn’t be too far of a stretch if Gunn answers a question about this to fans in a few months and the ripple effect of the revelation hits all over again.