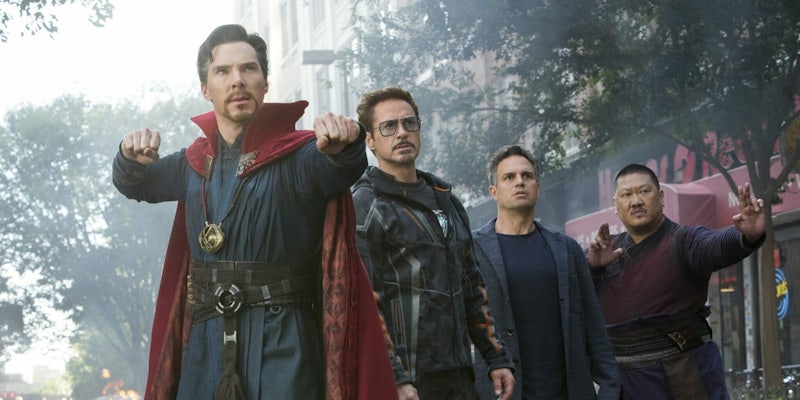 ‘Infinity War’ writers insist all those character deaths are ‘real’

Literally no one is buying this.

Remember that long period when the Game of Thrones creators insisted that Jon Snow was like, totally dead, for realsies? Well, the people behind Avengers: Infinity War are trying the same thing, and it’s already exhausting.

Speaking to BuzzFeed, screenwriters Chris Markus and Stephen McFeely discussed the bloodless bloodbath at the end of Infinity War—and what it means for the next movie.

“[Avengers 4] doesn’t do what you think it does,” said Markus. “Also…[the deaths are] real. I just want to tell you it’s real, and the sooner you accept that, the sooner you will be able to move on to the next stage of grief.”

This is kind of hard to swallow. While a couple of Infinity War‘s deaths could be permanent (Gamora; Vision), Thanos‘s final massacre will clearly be undone. As many fans have already pointed out, all the major players have sequels coming up. There’s just no way that Black Panther, Spider-Man or Star-Lord will stay dead. So when Chris Markus says the deaths are “real,” he’s either being wildly disingenuous, or he means the deaths are real to the characters. As in, Tony Stark can mourn Peter Parker because he believes he’s dead while we obviously know it won’t last.

When characters die in a superhero comic, the audience enters into a willing suspension of disbelief. We know the heroes will return a few years down the line, but for now, we can appreciate the perverse satisfaction of fictional grief. And that’s fine! But in the case of Infinity War, it’s pretty hard to suspend that disbelief. The only characters in real danger are members of the supporting cast, like Scarlet Witch and Sam Wilson.

It’s already clear that the next 12 months of Marvel interviews will be highly annoying. In order to preserve Avengers 4 spoilers, the studio will loudly insist that all the “dead” characters are definitely, permanently dead. Meanwhile, the fans will be torn between concern for vulnerable fan-favorites like Bucky Barnes and repetitive explanations about why Spidey can’t actually be dead. How fun!