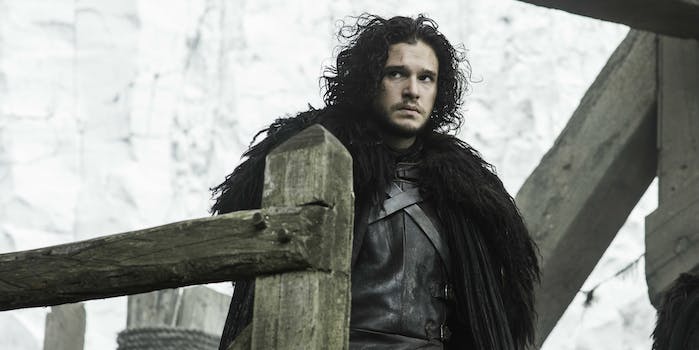 Fans have been waiting for this clue for years.

Warning: This story contains a major possible spoiler for Game of Thrones season 7.

The revelation last season that Jon Snow was really the son of Lyanna Stark was one of Game of Thrones‘s biggest reveals to date. But it immediately raised dozens of questions, chief among them: Is Jon really a bastard at all?

Until now the exact nature of Lyanna’s disappearance with Rhaegar Targaryen remained unclear. Northerners (including the Starks themselves) believed that Rhaegar “kidnapped her and raped her“—one point that factored into the rebellion against Rhaegar’s father, Mad King Aerys II Targaryen. Others suggested Lyanna fell in love with the charming Targaryen prince and ran away with him.

Either way, we knew at the end of last season, via Bran’s flashback, that Lyanna gave birth to Jon and handed him into her brother Eddard Stark’s care shortly before she died. It didn’t appear that she was being kept against her will, but the show left fans guessing about Jon’s parents’ relationship. Rhaegar already had a wife and two children, and while Targaryens have been known to practice polygamy, the idea would have been anathema to a traditional Northerner like Lyanna. Ned Stark took Jon home as his bastard son to protect his identity and keep him safe, leaving the mystery of Jon’s legitimacy open to speculation.

But in a tiny scene Sunday night, fans finally got the clue they’ve been waiting for. Gilly, practicing her reading with Sam by reciting passages from High Septon Maynard’s journal, stumbled on this entry:

“Maynard says here that he issued an annulment for a Prince ‘Ragger’ and married him to someone else at the same time in a secret ceremony in Dorne,” Gilly reads. She questions if that’s common practice in the south, but Sam doesn’t answer the question. Instead he’s frustratingly distracted by the maesters’ refusal to believe the threat of the Night King and his army of the dead.

If Sam had been listening a little more closely, he might have realized that Gilly’s pronunciation of “Ragger” sounds an awful lot like it should be “Rhaegar.” If Rhaegar and Lyanna did have a secret wedding in Dorne (which syncs with their supposed location at the time), it would mean that Jon is a legitimate son of Rhaegar Targaryen.

The show doesn’t linger on the detail, and it’s not discussed by the showrunners in their after-the-episode recap. Perhaps that’s because they’re waiting for a bigger reveal later this season. But you can bet eagle-eyed Game of Thrones fans will not let the moment go unnoticed. Like last season’s revelation about Jon’s parentage, this too raises questions and complications. What will Jon do if he finds out he has a considerable claim to the Iron Throne—and importantly, what will Daenarys Targaryen and the Northern lords think if they learn he’s a Targaryen prince?

For now it’s all still a secret, except to Bran, and he doesn’t seem to be sharing. But when (and if) it does eventually come to light, the fallout could be enormous.