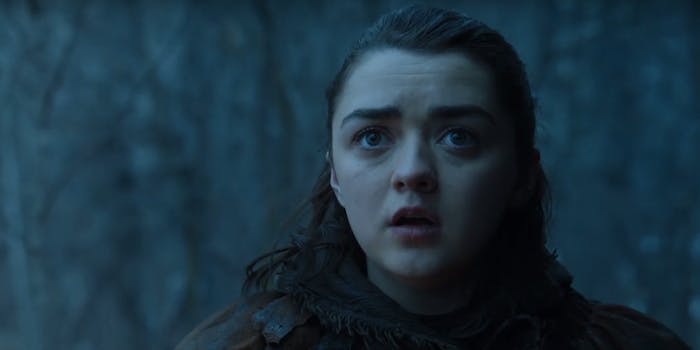 We got 2 huge reunions on ‘Game of Thrones’

When the snows fall and the white winds blow, the lone wolf dies but the pack survives.

Warning: This article contains spoilers from the latest episode of Game of Thrones, “Stormborn.”

Nymeria, Arya’s direworf, who last appeared in episode 2 of the series, has been one of the show’s most asked-about mysteries. She was last seen fleeing into the woods after Arya chased her away in a effort to save her from Joffrey’s wrath. Since then fans have speculated as to whether the loyal wolf would ever reappear.

In the episode “Stormborn,” we see the childhood companions together again, if for only a moment. Nymeria materializes out of the woods, instantly recognizable for her massive size. The warriors face off for a lengthy, emotional moment—and Arya, tearfully asks Nymeria to come North with her.

Instead, Nymeria, a pet no longer, turns her back on her old friend and retreats into the trees. Arya recovers from her rare moment of vulnerability, and the acceptance in her eyes as she watches her old friend disappear speaks volumes.

“That’s not you,” Arya whispers to herself.

Arya’s final words to her wolf are a reference back to a moment from season 1, showrunners David Benioff and D.B. Weiss revealed after the episode. Ned Stark describes to his youngest daughter the future that might await her as a prominent Northern lady, to which she responds to with a steadfast “that’s not me.”

This moment also hints at Arya’s direct future. Her acknowledgement of how much Nymeria has changed into a wild hunter may remind Arya that it won’t be easy for her to go home either.

Of course Arya’s meeting with Nymeria wasn’t the only exciting reunion.

Arya comes face to face with another old friend, Hot Pie, one of the few of her traveling companions from season 2 who survived. He had a brief reemergence on screen in season 4, when Brianne of Tarth and Podrick stopped at the Inn at the Crossroads. As the two departed, he gave them crucial information that led them closer to finding Arya, and also gave them a loaf of bread shaped like a direwolf.

The young man was again the deliverer of vital information on Sunday. He tells Arya of the retaking of Winterfell after the battle of the bastards, and of her brother Jon Snow’s status as King of the North. The welcome moment of good news shared between the two is short, but it reminds us all that Arya has been through.

The end of the episode sees Arya continuing on, still alone. She may still be a lone wolf for now, but hopefully that won’t last long.

She is headed home, after all.