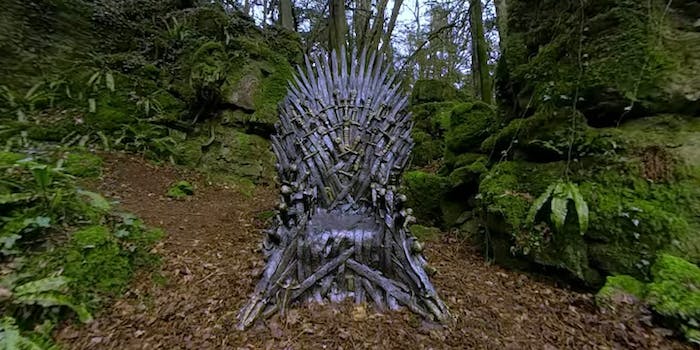 Can you find them?

When it comes to marketing the final season of Game of Thrones, HBO has largely shied away from showing any actual footage from the show. It’s only opted for a single trailer and a handful of clips over revealing anything more than the two plot points it already has, and like Avengers: Endgame, there’s a larger focus on what’s led to this moment.

For HBO, that’s also come with the arrival of its For the Throne campaign, which asks fans “How far will you go” for the Iron Throne, and over several weeks, it’s rolled out in stages. First, HBO had fans recreate iconic show props. Then it launched a large-scale blood drive in a partnership with the American Red Cross and asked fans to literally bleed for the throne, a rollout that didn’t come without its own set of controversies.

Now, it’s sending fans on a quest around the world to find one of six thrones with a countdown attached to it that will end around April 2 at 11:59pm ET. To date, two of the six Iron Thrones have been revealed, and each release includes three hour-long videos that show the throne at dawn, daytime, and dusk.

6 Thrones.
6 Locations.
Who will be the first to find them?
Begin your Quest #ForTheThrone: https://t.co/MTUv2SRuSh pic.twitter.com/SW4GYx5E3x

The quest is reminiscent of the very unofficial global scavenger hunt to locate a Bill Cipher statue that appeared in Disney’s animated series Gravity Falls in 2016 except fans have a lot less to work with this time around. We see the Iron Throne in a series of 360-degree videos posted online by HBO, but there are few clues as to where those videos are filmed.

The first video puts the Iron Throne in a forest surrounded by moss-covered rocks—one of which appears to have a spiral pattern often used by the children of the forest and the White Walkers. “Find it amongst the children of the forest,” one video caption reads. In a subsequent post, the Game of Thrones Twitter account urged fans to “put together the puzzle pieces to go find this Godswood.”

On Wednesday morning, Sky Atlantic—which airs Game of Thrones in the U.K.—revealed that the first throne had been discovered in Puzzlewood, which is part of the Forest of Dean and located in Gloucestershire, U.K. Puzzlewood is described as a “unique and atmospheric ancient woodland that conjures up thoughts of magic, dragons and unicorns” and has been used as a filming location in multiple films and shows including Star Wars: The Force Awakens and Doctor Who—although not Game of Thrones itself.

The second video, which went live Wednesday morning, places the Iron Throne far north with nothing but snow for miles; while mountains loom in the distance, they’re small in stature. The dusk video is so dark that the throne itself is barely visible even under the Northern Lights. “You will find it under the lights of the north,” one caption reads.

There could be a couple of possible things to narrow this down. If you believe that it’s supposed to invoke filming locations, Iceland might be a possibility. The first location didn’t pan out—some initially believed that it was placed in Tollymore Forest in Northern Ireland, which is home to three season 1 filming locations.

Or we might want to look at where Game of Thrones airs (and who airs it) for clues. The first throne was located in the U.K. and revealed by Sky Atlantic. The second throne in the north might end up being located in a region covered by HBO’s northern affiliate, HBO Nordic. HBO Nordic’s region includes Norway, Sweden, Finland, and Denmark. If that’s more of an indicator, that would rule out Iceland, which isn’t covered by HBO Nordic (and airs on Stöð 2 instead).

In the next 13 days, HBO is planning to reveal the locations of four more Iron Thrones, and as the throne appears to land near them, fans will dig even deeper for clues. For those who participate, it’ll add to the thrill of the chase, but it also highlights a possible snag on the entire campaign. HBO’s marketing remains focused on the throne even as the show turns to a fight between the living and the dead, but who’s to say that when all is said and done, there will even be a throne to fight over?