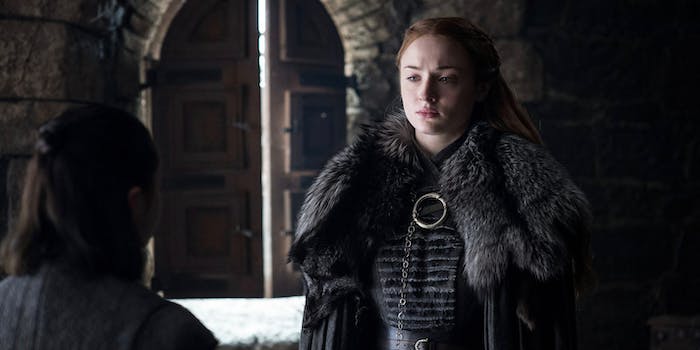 Two of Game of Thrones’ most famous locations—King’s Landing and Winterfell—have been part of the show’s fabric since the beginning. And while fans have long speculated that King’s Landing wouldn’t survive to the end, fans may need to start worrying about that other Westerosi stronghold if a new set video is any indication.

A Facebook video that appears to have originated on Snapchat revealed a major piece of the Game of Thrones set is on fire. If you look closely you can see exactly which set piece is in flames. Though the person who recorded the video says “doubt winterfell’s on fire,” it appears that the Stark stronghold is on fire.

The end result is hard to deny: At some point during season 8, Winterfell will burn—and it will burn with a lot of people around. We don’t know yet how and why, and, presuming it becomes uninhabitable, where everyone located there will go next. And what does it mean for the North now that its stronghold is no more?

Here are some possible explanations for what’s about to go down.

1) The Night King and Viserion burn Winterfell to the ground

That all changed after Viserion burned a hole in the Wall large enough to break its protective barriers and allow the army to pass. The Game of Thrones Viewer’s Guide confirmed that Viserion did it with blue fire, not ice, so it would just be a matter of editing the flames seen on-set to be blue if Viserion is the source of the destruction. The extras could include a horde of White Walkers and wights alongside Winterfell’s previous residents.

2) The living set Winterfell on fire on purpose

As it stands, three Starks remain in Winterfell at the end of season 7 while a fourth—Jon Snow through his mother Lyanna—is bringing Daenerys Targaryen and her two remaining dragons home. If the Night King plans to head south, both to take over Westeros and build his army, it’s only natural that he’d set his sights on Winterfell as the North’s primary sanctuary and the home of the new Three-Eyed Raven. It’s safe to speculate that Winterfell will eventually serve as the location of a major battle.

The bigger question is why the living might set the Stark’ ancestral home on fire. It could be an attempt to burn the dead from that battle. If the Night King has the power to resurrect corpses who’ve been dead for hundreds or thousands of years, it could be a way to fight back against the many, many dead Starks buried deep within the crypts. (While most arrived there well before Game of Thrones began, Jon ordered that his brother Rickon would be buried next to Ned Stark after the Battle of the Bastards—and after Jon learned what White Walkers could reanimate the dead.)

It could even serve as a blockade or a distraction as the survivors escape with their lives. The idea could come from rulers, strategists, or even scholars looking for an advantage, albeit a costly one for the Starks. The how is probably much simpler: If a person didn’t set the blaze, Daenerys’ dragons probably did.

3) The living set Winterfell on fire by accident

Sending her army to take Winterfell while the Night King’s army lurks in the North isn’t the most sound military strategy—and one, if enacted, that will almost certainly backfire in Cersei’s direction. But if Cersei is able to take back the land she lost in season 7, she might believe she can win it all before the Night King arrives.