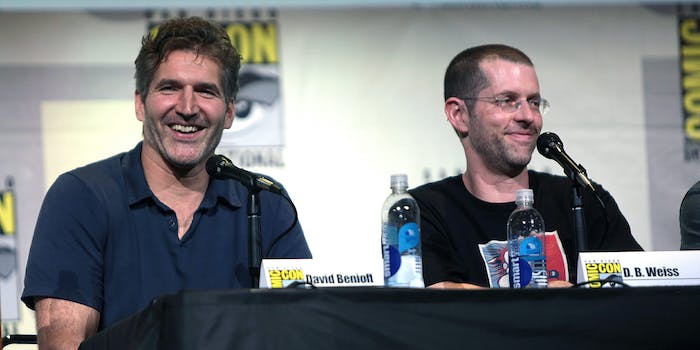 It will be a series of films separate from the main series and a recently announced film trilogy.

Not much is known about the new series of films—or even how many movies that “series” will consist of—apart from Benioff and Weiss’ involvement. There is also no planned release date. Lucasfilm noted that the Star Wars series will be different from both the Skywalker Saga (Episodes I-IX) and the recently announced Rian Johnson Star Wars trilogy

“David and Dan are some of the best storytellers working today,” Lucasfilm president Kathleen Kennedy said in a statement. “Their command of complex characters, depth of story and richness of mythology will break new ground and boldly push Star Wars in ways I find incredibly exciting.”

Westeros has Benioff and Weiss tied up for the foreseeable future with the final season of Game of Thrones still filming, but the duo indicated that this will be their next project.

“In the summer of 1977 we traveled to a galaxy far, far away, and we’ve been dreaming of it ever since,” Benioff and Weiss said in a joint statement. “We are honored by the opportunity, a little terrified by the responsibility, and so excited to get started as soon as the final season of Game of Thrones is complete.”

The reveal of Benioff and Weiss’ new project is already leaving fans with mixed feelings. On one hand, they helped turn Game of Thrones into the worldwide phenomenon it is today, wrote the majority of the show’s episodes, and are directing the series finale. (And once they start work at Lucasfilm, they’ll only be the latest Game of Thrones alum to work on a Star Wars film.)

But their writing has received plenty of criticism over the years on Game of Thrones’ reliance on sexual assault as a plot point and how the show handled gender and race—criticism that resurfaced when HBO greenlit Benioff and Weiss’ controversial Civil War alternate history drama Confederate. It’s unclear what will happen to Confederate now that Benioff and Weiss have announced they’ll be working with Lucasfilm after completing work on Game of Thrones.

The announcement is also frustrating for fans who have hoped Lucasfilm would appoint women or people of color in major roles behind the camera. While the modern Star Wars trilogy has been inclusive in front of the camera, every Star Wars film in the works is directed by a white man or has white men at the helm producing it.

Lucasfilm ended the press release on a humorous note, adding that “there have (thankfully) been no sightings of White Walkers around Lucasfilm.” But with Benioff and Weiss’ involvement in both Westeros and the galaxy far, far away, perhaps we should worry about a possible tauntaun sighting in Winterfell instead.