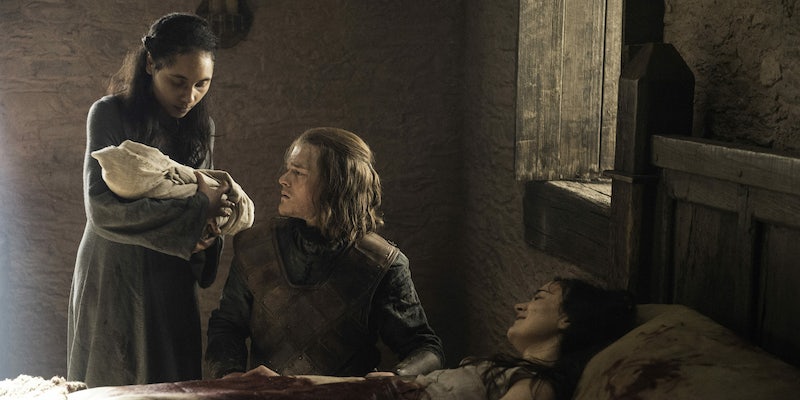 It’s right there on the page.

The secrecy surrounding Game of Thrones ahead of a new season is at the point where critics don’t even get to see new episodes ahead of time anymore. We have set reports and vague hints from the creators and actors alike, but we still ultimately don’t know much about the great war promised in the season 7 trailers.

But now one of the lingering threads of season 6 might have been answered ahead of time in, of all places, a magazine article.

The latest issue of Empire Magazine includes a feature where the cast of Game of Thrones revealed “15 things you need to know about the penultimate season” of Game of Thrones. Although the article confirms Jim Broadbent’s character—he’s playing Archmaester Marwyn—the article is pretty standard stuff that many fans have already read. Until you get to the ninth item on the list.

First shared on r/freefolk, a spoiler-friendly subreddit where people can openly discuss the show and books without having to mark spoiler material, the snippet photographed in the article appears to reveal Jon Snow’s true name: Jaehaerys Targaryen.

It’s not photoshopped, either. Here’s a closer look at the shot, courtesy of the digital edition of Empire Magazine’s July 2017 issue.

That could seem like a throwaway line, except that it’s actually a huge reveal, if true. (It’s not clear if Empire accidentally leaked real inside intel, or if it just printed fan speculation without realizing the name has not been officially confirmed.)

In the scene where Lyanna Stark makes Ned promise to take care of Jon and keep his true identity hidden—especially from Robert Baratheon—she also tells Ned his name. Bran Stark, who’s in the background, hears it but we don’t; we never hear what Lyanna said after  “His name is.” Lip readers have noted Lyanna appears to be saying the “ae” sound that is common in many Targaryen names, so that didn’t narrow it down as much as you’d think. Jaehaerys was among the names floated around along with Aegon, the name of the Targaryen who conquered Westeros as well as Jon’s half-brother Aegon, who’s dead by the time Jon is born.

Second, Jon’s father Rhaegar was already married to Elia Martell when he met Lyanna Stark and ran away with her (or kidnapped her, depending on who you ask). While polygamy has occurred with the Targaryens, as of the end of season 6 we have no indication that Rhaegar and Lyanna ever married. If Rhaegar and Lyanna never married, Jon would still be a bastard. With his name being revealed as Jaehaerys Targaryen, that likely means his parents married some time before Rhaegar’s death.

Interestingly enough, the most recent Jaehaerys to take the Iron Throne, Jaehaerys II Targaryen, was cut completely out of Game of Thrones to condense the family tree a bit. Jaehaerys II was Daenerys’ grandfather and didn’t have a long reign; he was a weak king, and one of his main additions to the story was to force Daenerys’ parents, his children, to marry each other in hopes that the Prince That Was Promised would arrive. The first Jaehaerys Targaryen, on the other hand, had the longest reign of any Targaryen ruler, one full of peace and stability.

If Jon follows in the footsteps of his namesake, that wouldn’t be such a bad thing for him.