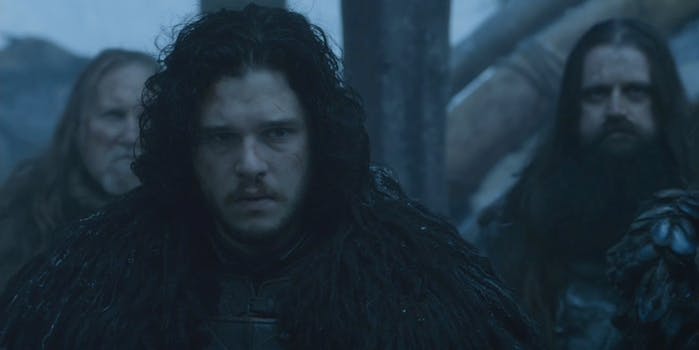 "You know nothing, Jon Snow" is a bit of an understatement.

One of the earliest facts revealed to the audience in Game of Thrones could just be one big, fat lie.

The main thing we know about Jon Snow from the shows and books—aside from the fact that he knows nothing—is that he’s Ned Stark’s bastard, and everyone he encounters seems keen to remind him of that, lest he ever have a chance to forget.

Except, as many fans suspect, that’s not the case.

Alt Shift X breaks down one of the most popular Game of Thrones theories, which explains that Jon is not the son of Ned Stark, but rather of his sister Lyanna Stark and Rhaegar Targaryen, who either kidnapped her or with whom she ran away. That’s where the Tower of Joy comes in. That’s where Ned goes to rescue Lyanna, and where he sees her for the last time. For many fans, that moment of reunion is key to finding out who Jon really is.

The theory is known online as R+L=J, and it’s widely accepted by many of its fans as fact. For one, Ned is haunted by a lie he told that’s as old as Jon.

The amount of evidence seems to outweigh any of the other theories in which Ned is the father, and as the narrator explains, if they had Jon out of wedlock, he’d still be a bastard. But if Lyanna and Rhaegar were wed, Jon could very well be a contender for the Iron Throne as a legitimate heir. As the son of a Targaryen and a Stark, he would also be the very embodiment of “a song of ice and fire.”

But with only one remaining witness to the events that took place at the end of Lyanna’s life, chances are Jon will still know nothing for some time to come.