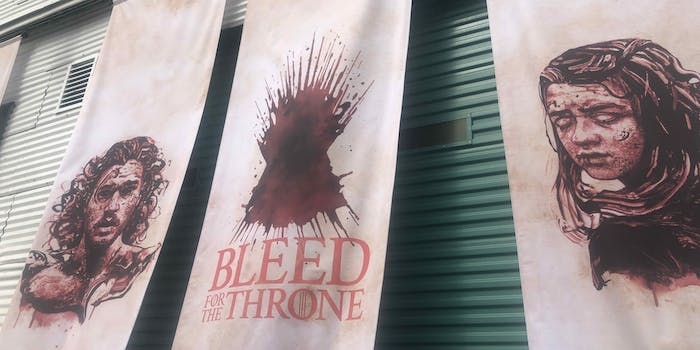 Inside the bloody, immersive ‘Game of Thrones’ SXSW experience

'Are you ready to walk in the footsteps of those who bled before you?'

The Red Priestess called my name and I rose from the pew, awaiting further instructions. Once she finished her list, I lined up with the others to kneel down before her. When it was my turn, I bent down while the woman, who wore a belted floor-length dress and obvious red wig, looked directly into my eyes and recited a line about finding light in the darkness. I tried hard not to laugh.

Afterward, I received a pin branded with my experience and was finally released into the wild—an outdoor area with a horse, actors in costume, and complimentary Shake Shack burgers. Nearly two hours before, I arrived at a warehouse in Austin, Texas, for an immersive Game of Thrones SXSW experience that people expected to be on par with last year’s Westworld experience. Since this is my first SXSW, I didn’t know what to expect, but I love immersive events and escape rooms. I imagined an experience that would transport me into the world of the massively popular HBO show.

Instead, most of my experience comprised of waiting in lines—despite my appointed time. Once I was welcomed inside, I waited in another line to received a QR code that was attached to my wrist (which took an hour and three people to remove). Then I was directed to another line to receive headphones and a smartphone for the first part of the immersive experience, which briefly summarizes all the challenges faced by several main characters in Game of Thrones over the last seven seasons, including Jon Snow, Tyrion Lannister, Arya Stark, and Cersei Lannister. Before entering this short immersive maze, a soldier in armor asks you if you are “ready to walk in the footsteps of those who bled before you.” This question probably resonates more with the participants who donated blood.

Yes, this Game of Thrones event includes a Red Cross blood drive that ties into the themes of the fantasy series, and it’s aptly named “Bleed for the Throne.” Blood donors are offered gifts as an incentive. I chose to not give blood because I thought I’d be able to skip to the immersive portion quicker. Due to federal regulations, the blood drive was not open to all participants. If you’re a man who is sexually active with other men, Red Cross prohibits you from donating blood if you’ve had sex within the last 12 months. As the Daily Beast reported, gay men are calling the FDA ban “discriminatory” and some are frustrated that they can’t participate in the national Bleed for the Throne drive, which takes place in 43 states across the U.S. But if you are able to donate blood, you receive a commemorative T-shirt and a chance to attend the season 8 premiere of the show. The immersive aspect tied to the blood drive is only available in Austin through Saturday.

Back to that immersive aspect: While I didn’t donate blood, I was still capable of replying “yes” to the soldier and moving on to the next activity. I got through the audiovisual experience in about five minutes. Then I surrendered the headphones and smartphone and was told to sit in a pew that faced a stage. Dozens of other people were sitting down, and no one seemed to know what we were supposed to do. Several minutes passed. I looked around and everyone was hunched over, looking at their phones. I started to grow restless. I craved the ability to move around the warehouse on my own. Finally, a choir entered the stage and performed the Game of Thrones theme song. The Red Priestess entered and walked around in character talking to different audience members. This part of the experience was fun but also unnecessary. A giant Red Cross logo glowed in the background, placed above the Iron Throne.

No one was invited to sit on the throne, which seemed like a major oversight on HBO’s part.

The best part of this SXSW Game of Thrones immersive experience was the outdoor area that you are allowed to enter once you complete all the waiting in lines and sitting in a pew. Here, there are actors dressed in costume who are interacting with you, and multiple booths that allow you to “train” for battle. The best part is that you are allowed to roam free here and exit whenever you choose, which is how all immersive experiences should operate. Overall, if you’re a Game of Thrones fan, you’ll probably enjoy this event. But keep your expectations low for the immersive aspect. Game of Thrones is one of the biggest TV dramas of the last decade, and it’s approaching its final and eighth season, which premieres on April 14. HBO doesn’t need a fancy event to get the word out. GOT fans are well aware of the upcoming season. Perhaps that’s why the company didn’t pull out all the stops for their SXSW event.