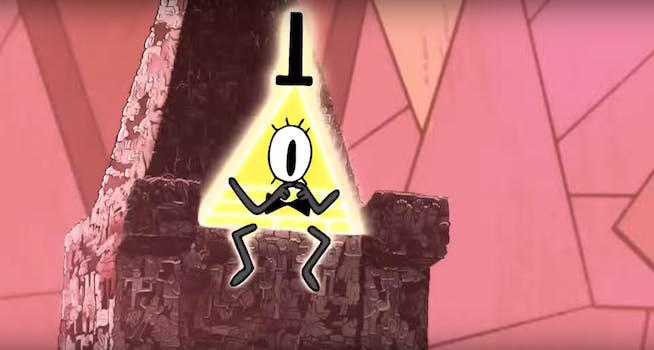 The Mystery of Gravity Falls/YouTube

Fans of the show are going on one last mystery hunt.

Warning: This article contains spoilers for the series finale of Gravity Falls.

Gravity Falls ended to critical acclaim (and on creator Alex Hirsch’s own terms) Monday night after two seasons that were full of mysteries, Easter eggs, jokes, and adventures. But fans are still trying to solve one last mystery together—one that might lead them into the real world.

Gravity Falls, which aired over the course of four years, gained a cult following of fans who would comb every aspect of the episode for clues, codes, messages, and ciphers to decrypt and solve. Everything they discovered fed into the larger mythology of the show, including the title card that flashed at the end of every episode.

From the Illuminati references, to the prophecy to defeat the triangle dream demon Bill Cipher (modeled on the triangle on the dollar bill), to the various ties between the many recurring characters, to the reveal of Grunkle Stan’s twin brother Stanford—which fans nailed down months in advance—the show’s devoted viewers figured it all out.

Once Hirsch caught on, he and the other creators made the puzzles more difficult to find and solve. Naturally, the fans loved it, and they solved them just as quickly.

The series finale managed to tie up many of the show’s loose ends and told a strange, heartwarming story, but the codes and ciphers scattered throughout the episode weren’t the only thing on fans’ minds as the show offered one last tease.

After the credits rolled, we were shown the statue of Bill Cipher, which was introduced toward the end of the episode. Except this time, Bill appeared to be live instead of animated. Add in some vintage film effects and you’ve got yourself an intriguing clip on your hands.

The town of Gravity Falls, Oregon, may be fictional, but many fans were left wondering something: Was the Bill Cipher statue real, and was this one last mystery for the fandom to solve?

Add in the decoding of another cipher—one hidden on the bus that Mabel and Dipper Pines took to return to California—and you’ve got a fandom conspiracy on your hands. Using the Vigenère cipher, with the code coming from a reversed video of Bill’s demise, fans figured out the message—leading many of them to believe that Bill’s statue was real.

Dipper and Mabel's journey is over but what about yours? Go out and explore, have an adventure, and stay weird. pic.twitter.com/hl65KUEsFI

Disney did not respond to a request for comment.

The Gravity Falls subreddit quickly began identifying possible locations for Bill’s statue, with redditors urging each other not to trespass on private property while trying to solve the mystery. Unfortunately, many of the options that fans have identified so far have on been private land.

Hirsch took inspiration for the Mystery Shack—the tourist trap that Stan built and stocked full of fake wonders to make lots of money—from the Mystery Spot in Santa Cruz, California, and the Oregon Vortex. The Oregon Vortex was one of the locations Hirsch and his staff visited as part of a four-day 2013 roadtrip to find “the weirdest tourist traps in Oregon and Northern California,” and they left several drawings of Bill Cipher behind for fans to find.

One redditor explored the outer parts of the Oregon Vortex—which hasn’t opened yet for the 2016 season—but reported that a quick scan didn’t turn up anything.

The Temple of Oculus Anubis in Damascus, Oregon, was also considered a possibility. It already has pyramids reminiscent of the symbols seen throughout the show, plus gates referenced by the cipher. But it, too, is located on private property.

Another popular theory places the statue at the real-life location of Gravity Falls. Googling “Gravity Falls, Oregon,” puts it right next to the Oregon Vortex in the southwest part of the state, but a decoder site revealed a set of GPS coordinates placing it in central Oregon, right in the middle of the Warm Springs Reservation.

However, the person behind the site, who appears to work for Disney, debunked that idea, worried that fans might travel in vain to the middle of nowhere in Oregon.

Note to Self: Remove 3 year old Easter eggs on the decoder site lest people think they actually lead to hidden locations in the real world

A few sleuths proposed the theory that the statue isn’t in the northwest—or even the United States. It might be in Toronto, near the studio that helped produce the Gravity Falls pilot.

One person analyzed all 31 frames of the cryptic final clip and determined that the video was either real—meaning that someone shot real footage of a Bill Cipher statue—or impeccable CGI overlaid with an 8mm filter. The person also identified the time of day and the range of months in which it was recorded (between 11am and 2pm somewhere between June and August).

“The weather effects on Bill could be fake to give the illusion he’s been there for some time,” MakuRuu wrote. “Or it could be natural moss growth, which would indicate he’s been there at least a year.”

Fans may not be any closer to finding the statue—if it does in fact exist—now than they were when the show finished. But if it does exist, fans will find it eventually—just like they solved every other mystery in Gravity Falls.

And after all, as Bill told Lil Gideon, reality is an illusion.

Screengrab via The Mystery of Gravity Falls/YouTube