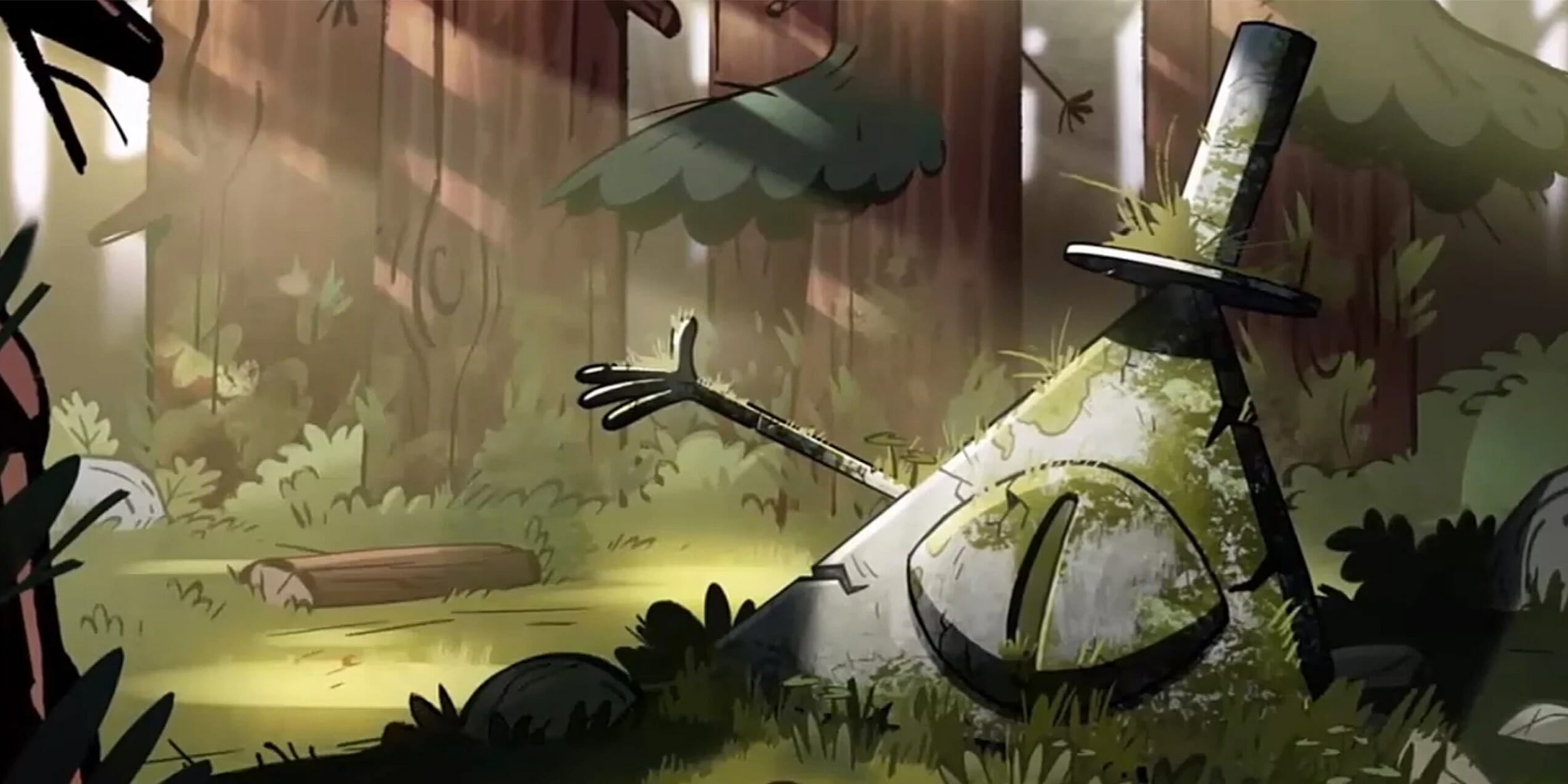 And it's in the state that Gravity Falls calls home.

#CipherHunt took fans from St. Petersburg, Russia, to Japan and all the way to Reedsport, Oregon—the same state that is home to the fictional town of Gravity Falls—with a population of around 4,100. It was there that fans found treasure they worked so hard to find.

DAY 13- #CipherHunt is COMPLETE! Our BRILLIANT fans cracked the cipher & discovered the map led to Reedsport OR! pic.twitter.com/bTj5eJu2Oo

And like any good discovery, least of all one that thousands of fans had followed and aided religiously for nearly two weeks, it was photographed and televised for the internet to see.

I’m just going to hang out here, wait for you guys, take more pictures and be eaten by bugs. #CipherHunt pic.twitter.com/dG8EdDAeEn

The groups of fans who descended upon Bill’s statue Tuesday night not only found the physical form of the triangle dream demon who terrorized the Pines family and the residents of Gravity Falls, but an actual box full of treasure. That contained a smaller version of Bill’s statue, fake money, a drawing of the Pines family, Bill’s statue (it read “Trust No One” under UV light), and a couple of messages congratulating the treasure seekers from Hirsch. One came in the form of a written letter visible only with the UV light.

Congratulations on finding the Bill Cipher statue, Bill’s final resting place! Whosoever finds this treasure is hereby the new “Mayor of Gravity Falls”—so use your title well! Chances are you didn’t do this alone, so share the wealth! You are an amazing fan!

#CipherHunt better photos of what me and my brother ended up keeping! pic.twitter.com/8mv6DW8Bsd

The treasure box also contained a USB with an audio message from Grunkle Stan (voiced by Hirsch). Stan sings “We’ll Meet Again,” a song that Bill Cipher (also Hirsch) sings in the series finale, along with another congratulatory message.

“Um, anyway, you know, take a picture with the statue!” the message said, according to a transcription on Tumblr, which video of the recording corroborates. “G-ge- shake his hand! That’s kinda like a prize. And uh, tell everybody how you—you did it first. That makes you the best.”

Of course, plenty of fans did follow that advice. At one point, a baby even touched Bill’s hand, which is how Bill Cipher makes his deals, something that inspired some pretty great fanart. Bill made a lot of deals that night. 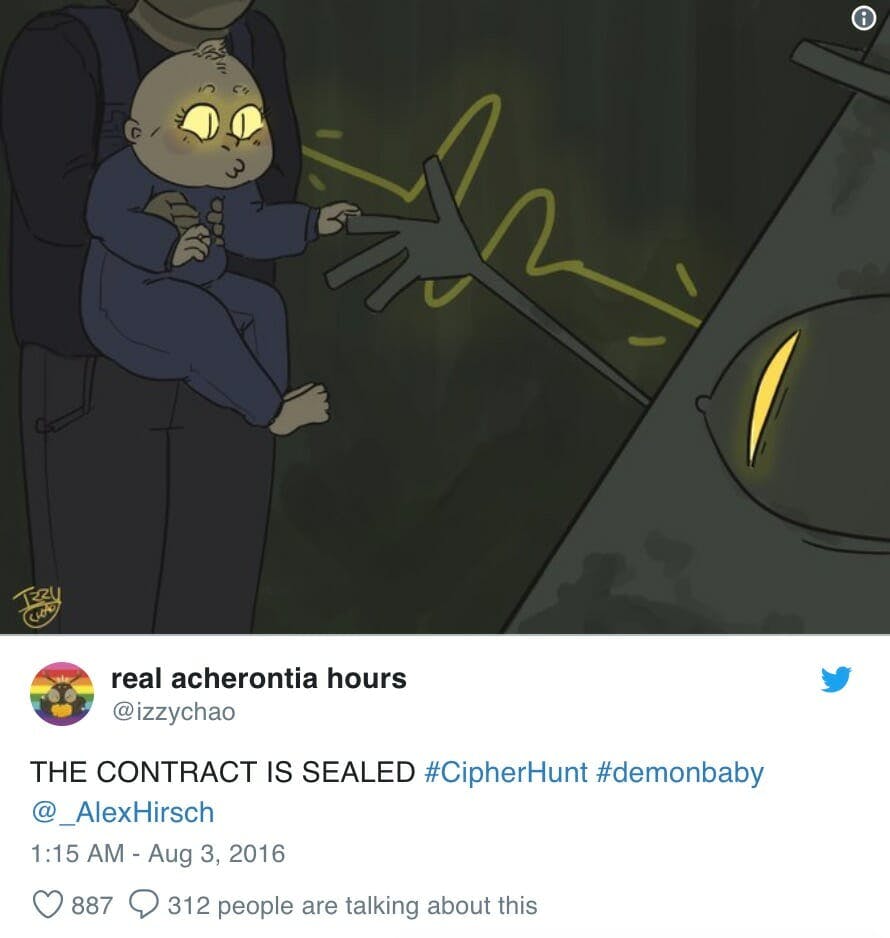 The discovery of Bill Cipher’s statue in the middle of Oregon culminates a nearly two-week global internet scavenger hunt—and the first seeds of which were planted even earlier. Hirsch launched the hunt on Twitter, and fans quickly scrambled and reached out to across fandoms, communities, and countries for help finding the clues. It was impossible for one person to do it and the #CipherHunt was more about teamwork than any individual getting to the statue first, so people quickly collaborated. After a strong start, the hunt stalled as one of the clues wasn’t in the place it was supposed to be.

Hirsch changed gears to reveal the next clue, which led fans near Griffith Observatory in Los Angeles. The hunt took fans to California State Summer School for the Arts, and a P.O. Box that contained a giant puzzle, and they even got some help from Hirsch’s twin sister Ariel and Dipper Pines himself, Jason Ritter.

The real-life puzzle took days to complete, but fans online also could solve a digital version. Completing both would give fans access to the show’s original pilot as well as extra scenes.

The last clue, located on the same photo as the first one, led fans to Reedsport, and so the final resting place of Bill Cipher was revealed. And there it will stay for the time being as more fans are able to travel to see it. Hirsch expressed gratitude as he thanked the fans for a hell of a ride.

But GF fans proved to be an army of Dippers who are clever, curious & passionate enough to solve anything. So proud of you guys (2/2) 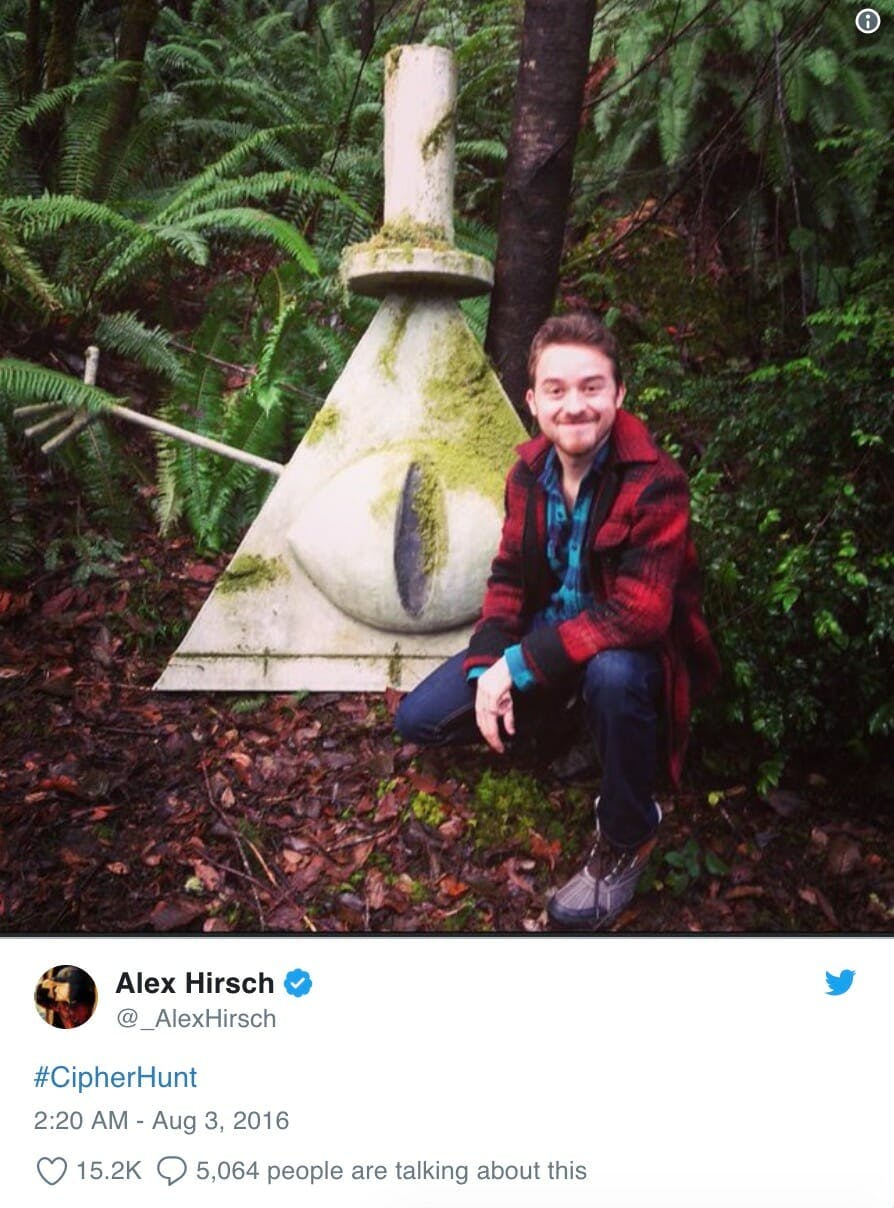