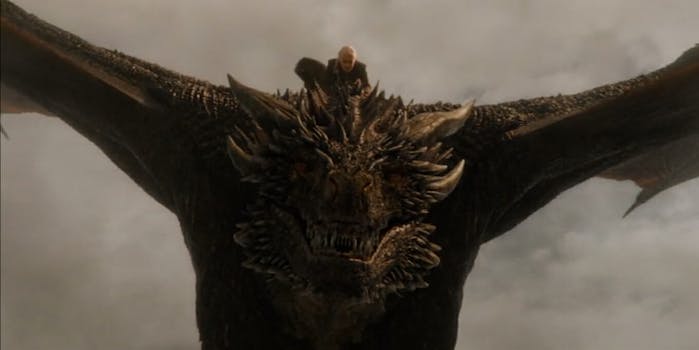 Here's what you need to know before the show returns.

Fans flock to Game of Thrones for myriad reasons. Swords, intrigue, and no small amount of incest have been dominating conversations since the series premiered in 2011. For the final season, conversations are likely to shift in a very reptilian direction as dragons take center-screen. But there are so many of the creatures that it can be tough to keep track. If you’re new to the series—or just need a refresher course—here’s everything you need to know about the Game of Thrones dragon names.

Fans of the award-winning series waited six long seasons to finally see dragons soaring through the skies of Westeros. As we prepare to see a battle of ice and fire unfurl high above the seven kingdoms, here are some of the most important Game of Thrones dragon names.

Daenerys’ dragons are the last of these scaled death-bringers to roam the world in Game of Thrones. Drogon’s display of power in season 7’s “The Spoils of War” gave viewers a hint of what a real dragon battle looks like. After the rollercoaster of gut-wrenching action in season 7, fans await what looks to be an incredible face-off between Daenerys’ fallen dragon Viserion and his siblings in season 8.

The largest and most prominent of Daenerys’ brood, Drogon is named after Dany’s fallen love, Khal Drogo. He was hatched of the black egg given to Dany by Illyrio Mopatis in the pilot episode. His black-and-red scaling match the egg he was hatched from, as do his impressive wings.

As Daenerys’ personal mount, Drogon is much more commonly featured in the TV series than his siblings. His loyalty seems to stretch much farther than his brothers as well, as he is always the first to rush to Dany’s aid.

Viserion’s death at the end of season 7 had fans reeling. His icy-eyed return is still dominating conversations—and one fan theory that Jon Snow will ride Viserion—and is likely to do so until season 8 hits screens. Named for Dany’s petulant older brother, Viserys Targaryen, Viserion’s coloring in early seasons matched his cream-and-gold-hued egg.

Following his demise, Viserion’s coloring changed to a deep, ominous blue-black. Once transformed into an ice dragon, he became the mount of the Night King and used his vibrant blue flame to wreak havoc on the Wall.

Thus far in the series, Rhaegal has been the most minor of Dany’s dragons. Drogon is clearly the favorite—sorry boys, every parent has one—and Viserion’s death rocketed him to prominence. Rhaegal’s green-and-bronze scales distinguish him from his brothers, as do his yellow-orange wings. He is named after Daenerys’s oldest brother, Rhaegar Targaryen.

Balerion, the oldest known dragon in the Game of Thrones universe, was the chosen mount of Aegon the Conqueror. This behemoth of a dragon was instrumental in Aegon’s quest to become the first lord of the Seven Kingdoms. Together they burned a path through Westeros in a deluge of black flame. It was Balerion who forged the Iron Throne, melting together the swords of Aegon’s fallen foes. He was passed through the line of royal Targaryens following Aegon’s death, and along with the mounts of Visenya and Rhaenys Targaryen engaged in the Field of Fire—the only battle in which all three dragons participated. His massive skull still rests beneath the Red Keep.

Ridden by Aegon’s sister-wife Visenya Targaryen, Vhagar was named for a god of Old Valyria. Little is known of her appearance, but by her death, she was rumored to be second in size only to Balerion. Following Visenya’s death, Vhagar was ridden by several riders, the last of which was Aemond Targaryen. The two of them wrought destruction on the Riverlands before dying together in battle.

Like Vhagar, Meraxes was named for an Old Valyrian god. She was the chosen mount of Aegon’s second sister-wife, Rhaenys Targaryen. Large enough to swallow a horse whole, this golden-eyed beast was very close with her rider, who spent more time flying than both of her siblings combined. During the Field of Fire, Meraxes, Vhagar, and Balerion wrought massive destruction on the Targaryen’s foes. In a battle that made Dany’s destruction of Lannister men last season look like child’s play, they slaughtered thousands of men and ended at least one house—House Gardener—forever.

This beautiful silver dragon had an incredibly close bond with her rider, Queen Alysanne Targaryen. Legends say she was hatched when her egg was placed in Alysanne’s cradle by her sister Rhaena. By the age of 12, Alysanne had become a dragon rider. One of the few to survive the Dance of Dragons, Silverwing eventually became wild and retreated to the northwest of the Reach.

Also known as the “bronze fury,” Vermithor was ridden by Alysanne’s husband King Jaehaerys I Targaryen. A fearsome beast, Vermithor was one of the largest dragons to ever live. For more than 20 years following Jaehaerys’s death, Vermithor was riderless. In that time, he and Silverwing became a mated pair. Vermithor died during the Second Battle of Tumbleton, battling with both Seasmoke and Tessarion.