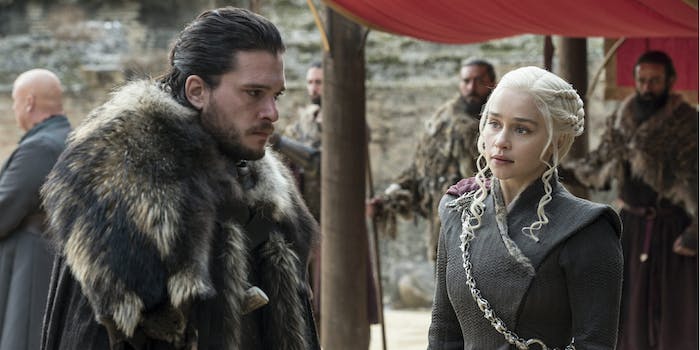 All of your ‘Game of Thrones’ favorites are toast, according to this algorithm

The end of Game of Thrones’ seventh season set the tone—and the stakes—for all-out war in the show’s final episodes. But who will make it to the end? One algorithm might have the answer.

Taylor Larkin, a data scientist who works for DataRobot, created an algorithm using data from the A Song of Ice and Fire fan Wiki and information from around 2,000 characters who appear in the book series written by George R.R. Martin. Larkin used a number of data points such as age, what house they’re associated with, gender, and how many family members they’ve already lost.

Even from just looking at the available information, Larkin discovered that men died more often than women, older age made characters more susceptible to death, and that House Targaryen had the highest body count among its members (whereas House Tyrell had the lowest). And if you had dead relatives, that also upped your chances.

With that in mind, the algorithm determined how likely death was for 10 characters left standing. And for many of them, the odds are not in their favor.

According to Larkin’s findings, Daenerys Targaryen has the highest chances of dying while Gendry, Robert Baratheon’s bastard son, has the lowest chance of death. With the other exception of Arya, who’s at 49.04 percent, every other character is more likely to die than live. Even Jon Snow, who’s already died, is likely to be a goner.

At an initial glance, some of those odds make sense. Daenerys will be in the forefront, facing both human and White Walker foes alike, and chances are she won’t want to stay put while others fight her battles for her. Many of those other players will also be in the thick of a physical or political battle, and with only six episodes left, there will be blood.

But while the algorithm is one way of trying to parse out how Game of Thrones ends, it’s a flawed one. Larkin’s data is based on the books and information from A Wiki of Ice and Fire, which ends with A Dance With Dragons and what’s publicly been revealed about The Winds of Winter, not the show, which he acknowledges. Game of Thrones’ adaptation of Martin’s books extends to the first five seasons and some of season 6, meaning we have close to two seasons of show unaccounted for. (Seasons 6 and 7 saw the near-end or decimation of House Martell, House Bolton, House Tyrell, and House Frey, all still around in the books.)

Characters alive in the show are dead in the books and vice versa, and although Larkin believes that much of the story in ASOIAF will play out like it does in the show, there’s no guarantee that events will happen in a similar manner—or that they happen at all. Some of the show’s events may be in response to previously created circumstances, and one of the show’s main characters who will likely be responsible for killing our favorite characters is a non-entity in the books: the Night King as Westeros’ original White Walker is a show invention. And we can only hope that season 7’s most polarizing plot (although maybe not the outcome) was a show invention.

But still, with a wait lasting anywhere from several months to over a year until it all ends, it’s one fascinating way to see just how much the odds are stacked against the living.

“While it’s a fun exercise to use book details to predict future plot points in the show, it’s ultimately going to be the showrunners who decide the fate of Westeros and all those who are involved,” Larkin wrote. “After all, I’m not even sure a machine learning algorithm could have predicted the amount of emotional distress this show has caused, and will continue to cause, as we all wait for the Long Night to come to an end.”