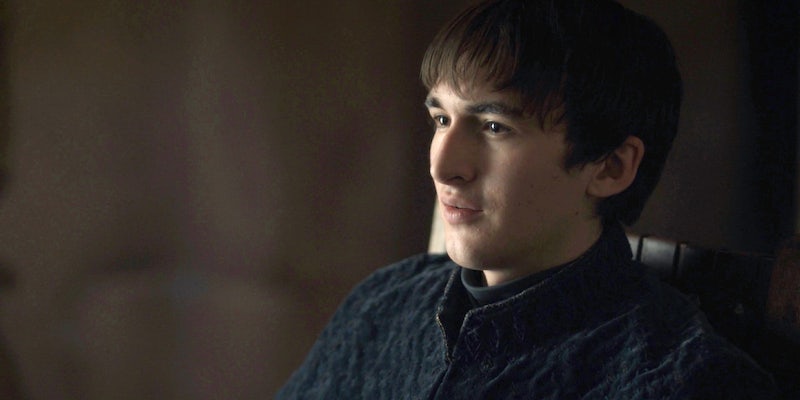 It's one of the things that R.R. Martin told the showrunners.

The end of Game of Thrones gave us a new ruler of Westeros in Bran Stark, a decision that became divisive among some fans due to the randomness of it all and how unlikely it seemed (along with what it said about power). But, according to the actor at the center of that decision, it’s the ending that George R.R. Martin planned all along.

In a new interview with Making Game of Thrones, an official Game of Thrones blog, Isaac Hempstead Wright—who’s played Bran for the past decade—gave some insight into what he thought about where Bran ended up. Initially, Hempstead Wright thought that Bran becoming king of the now-Six Kingdoms of Westeros was a joke, something he also told Entertainment Weekly immediately following the series finale.

He truly didn’t really believe that Bran would become king until the Game of Thrones season 8 read-through, but he also learned that Bran’s ultimate fate to rule came from someone other than the show’s writers.

“[Creators] David [Benioff] and Dan [Weiss] told me there were two things [author] George R.R. Martin had planned for Bran, and that was the Hodor revelation, and that he would be king,” Hempstead Wright said. “So that’s pretty special to be directly involved in something that is part of George’s vision. It was a really nice way to wrap it up.”

Benioff and Weiss, who learned the broad strokes of how A Song of Ice and Fire would end several years ago from Martin himself, have previously said that they wouldn’t say which parts of the final season of Game of Thrones were their creation and which parts came from Martin. Martin himself noted last month that he didn’t believe that the end of Game of Thrones would “be that different from my ending because of the conversations we did have.”

Even though Game of Thrones is over, there is still very little we know for sure about what Martin intends to include in The Winds of Winter and A Dream of Spring. Lyanna Stark is definitely Jon Snow’s mother, per Benioff and Weiss, who correctly guessed the identity of Jon’s mother to get Martin’s blessing to make his books into a TV show. (Other aspects, such as Jon’s resurrection and Daenerys Targaryen’s tragic end, seem safe to surmise.)

We also know of the existence of “three holy shit moments” that Martin told Benioff and Weiss during their fateful meeting in Santa Fe, New Mexico several years ago. In 2016, they revealed two of them to Entertainment Weekly: one was Shireen Baratheon burning and the second was the meaning behind Hodor’s name, “hold the door,” which Hempstead Wright references in his comments to Making Game of Thrones. At the time, all we knew about the third “holy shit moment” was that it was “from the very end.”

While we won’t know for sure for some time, there’s an argument to be made that the final “holy shit moment” is the reveal of Bran the Broken. It’s a shock to be sure, albeit a different kind of shock than some of the show’s bigger deaths and acts of cruelty. At the end of A Dance With Dragons, Bran is still beyond the Wall in the weirwood tree and has yet to truly become the three-eyed crow, as the Three-Eyed Raven is called in the books. He might not have political ambitions, but he’s still Brandon Stark.

But now that we know that Bran will one day rule over Westeros, the next question we have is, how does it happen? Thanks to the nature of adaptation, we can’t definitively say that it will occur the same way that it did on Game of Thrones; Martin himself might not even know how he gets to King Bran just yet. But given that it’s one thing we do know, we’ll be able to follow the throughline and spot any potential clues and hints much more closely when we finally do get the final two ASOIAF books.