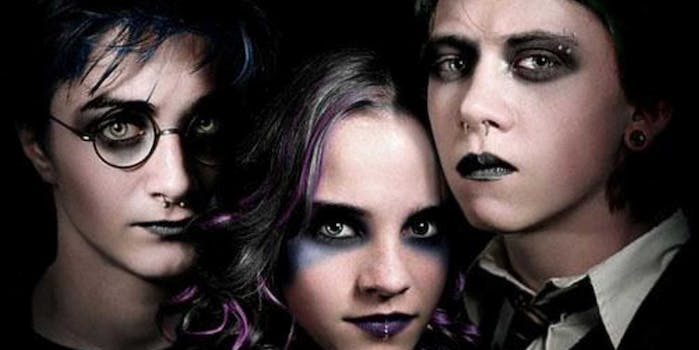 The worst “Harry Potter” fanfic ever is now a hilarious webseries

A self-professed goth girl wrote herself into Harry Potter, and it went down in fanfiction history.

No one can truly hold the illustrious title of “worst fanfic on the internet”, but “My Immortal” (named after the Evanescence song, because of course) is surely a strong contender.

Posted to fanfiction.net in 2006, “My Immortal” stars a teenage goth named Ebony Dark’niss Dementia Raven Way (seriously), who attends Hogwarts School of Witchcraft and Wizardry and proceeds to seduce Harry Potter, Draco Malfoy, and eventually Voldemort. It featured all the hallmarks of terrible fanfic: hundreds of grammar and spelling mistakes, a nonsensical storyline, and a Mary Sue protagonist who was clearly a glorified version of the author. Not to mention constant descriptions of the heroine’s “goffik” outfits from Hot Topic, and references to decidedly un-Harry Potterish bands like My Chemical Romance.

Harry Potter fans may be happy (or horrified) to learn that this masterpiece has now been made into a six-episode web series. It may seem odd for this to be happening now rather than seven years ago, but what you have to understand is that “My Immortal” is iconic. Due to its supreme awfulness, it’s infamous not just in Harry Potter fandom, but to most people in the fanfic community.

The general consensus is that “My Immortal” was so systematically terrible that it must have been a parody, but somehow that doesn’t seem to matter. Like Sharknado or The Room, it’s so bad it’s good. Not only is it featured on fandom wiki Fanlore, it has a Know Your Meme page and an entry on TV Tropes. And Tumblr’s My Immortal tag is still alive and kicking, full of nostalgic Harry Potter fans and people who have only just discovered the fic.

So, even though it’s years since the original story was completed and then removed from FF.net (and then heroically rehosted at a private site by a fan), enough people remember it that the first episode of the YouTube series has already been viewed over 30,000 times.

The question is, is it even possible to transfer the true beauty of “My Immortal” to webseries format? After all, this is the fanfic that gave us lines like this:

“I MAY BE A HOGWARTS STUDENT….” Hargirid paused angrily. “BUT I AM ALSO A SATANIST!”

“We started tiling of each other’s cloves fevently. He took of my blak thong and my black leather bar. I took of his black boxers. Then……………………… he put his trobbing you-know-what in my tool sexily.”

Well, you can judge for yourself. Two episodes have been released so far, and the series features plenty of classic “My Immortal” details, such as Harry’s inexplicable goth wardrobe, and Ebony’s inability to pronounce her own name. And like all good mid-2000s teen movies, it even has a cheesy nu-metal soundtrack.

Illustration via Know Your Meme