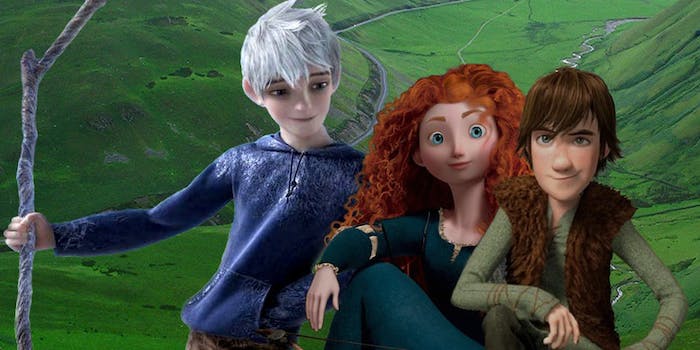 Sometimes even fanfic tags are works of art

No cows were harmed in the making of this article.

Sure, fanfiction is transformative, it’s often subversive, and it’s frequently very serious. But one of the reasons we love fanfic here at the Daily Dot is its whimsical side.

The Archive of Our Own (aka AO3), especially, is a great example of this dichotomy. The site was formed as a liberating, nonprofit fanfic archive designed to protect and preserve fanworks. It’s been anointed one of Time’s 50 best websites on the Internet and has become a noted fan-supported website with over 375,000 fics uploaded in 2013 alone.

But when you take a stroll through its “freeform” tags, the tags that aren’t about categorization and are all about having fun, you meet with a repository of creativity formed somewhere between “shameless self-gratification” and “ideas that sounded great when I was high.” Thankfully, the Twitter account @TagsofAO3 is here to catalog the best of the best.

I took painkillers while coming up with this (South Park)

What can we learn about our fandoms and the things we write for them from tags? Well, let’s start with the basics.

In this, the first tag that the newish Twitter account sent into the world, we learn the basics: No cows were harmed in the making of this Pacific Rim fic. Which is good, because the title of the fic in question includes the phrase “naked calf.” See how useful freeform tagging is? You can make puns and include helpful information all at once!

Sometimes the beauty of fanfic is how gracefully it can make fun of itself. What’s better than a three-way crossover fic that purports to ‘follow canon’? Nothing, that’s what.

Wait, maybe we’re wrong. This one is definitely better. What does the ghost of Ansel Adams, fanfic writer, do exactly? Does it even matter? It’s Homestuck.

Update: having looked up the fic, it turns out we were more or less right, but the pregnant Clint Barton was unexpected.

Do you hear the people fold, folding the cranes of revolutionary zen?

Then there are the tags that we can truly learn from:

But maybe the best part about AO3 freeform tagging is that so many tags don’t need any explanation at all, because no matter what fandom you’re in, we all know exactly what you’re talking about. Let’s face it, we’ve all written versions of each of these fics:

False Declarations of ‘No Homo’ (Attack on Titan)

SHIP DARCY WITH ALL THE THINGS (The Avengers)

enjolras doesn’t die in this, i guess that’s something (Les Misérables)

The universality of so many fandom tropes makes the truly quirky fanfic descriptions that much more delightful:

Is there any other kind of Polish grandma?

We’re awed by your prowess, author.

Can zombies give consent? (Hannibal)

concussed ducks in love (The Hobbit)

CONCUSSED DUCKS IN LOVE. Look, if you’re not on board with fandom yet, go get chased by angry, non-concussed, non-emotionally-satiated ducks.

seriously there are giant lizards (The Avengers)

Maybe ducks and lizards. The best thing about AO3? We can have it all.