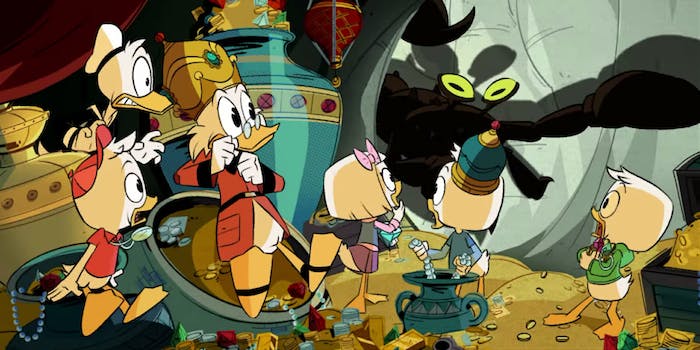 DuckTales is back! Showrunners Matt Youngberg and Francisco Angones have debuted their own take on the late ’80s and early ’90s Disney cartoon, bringing Huey, Dewey, and Louie back along with their Great-uncle, Scrooge McDuck. Of course, Webby Vanderquack returns to venture with the boys, and the series puts Donald Duck back in the spotlight as his nephews’ primary caretaker.

The 2017 series’ pilot episode is already out and episodes are scheduled to run through October. To celebrate the return of this beloved cartoon, here are some interesting DuckTales facts every fan should know.

Everything you need to know about DuckTales

The Soviet Union officially collapsed in 1991, but before then, Disney was already becoming extremely popular in Russia. When the Cold War officially ended, Russia’s first American cartoon just so happened to be DuckTales. It’s pretty fitting, too, seeing how Scrooge McDuck has an immense obsession with capitalism.

2) Each foreign adaptation has its own unique theme song lyrics

Remember the lyrics from the original DuckTales opening? They’re practically iconic. But don’t expect to connect with foreign viewers over the English theme. Vanity Fair reports that the song’s lyrics are vastly different from country to country. The French theme talks about Scrooge’s enormous power and wealth, the Norwegian version brags about the ducks’ exciting lives, and the Spanish version talks up all the adventures to explore with both bad and good people.

Scrooge McDuck’s money bin has always been a thing of glory, but for the longest time, it was unclear just how much gold Scrooge owned inside. LiveScience realized this was a pressing financial matter and sat down to figure things out. And it turns out Scrooge owns a good chunk of cash.

According to LiveScience, artist Don Rosa’s schematics place the money bin somewhere around 127 feet by 120 feet, with the bin itself most likely half full. In short, that’s 228,600 cubic feet of gold inside Scrooge’s bin, with 171,450 cubic feet of that space made up of gold coins proper (the rest is just empty air). A quick conversion translates that to 3,302,088,419 ounces of gold, and with an ounce of gold listed at $1,641 at the time, that meant Scrooge owned $5.4 trillion in gold coins alone. Of course, it’s been a few years since LiveScience did its calculation, and the price of gold has dropped to $1,200-$1,300 per ounce. That just goes to show the importance of diversifying your savings.

When Donald Duck said Scrooge McDuck ran a multi-trillion dollar business in the 2017 reboot, he was correct. All this doesn’t even account for Scrooge’s stock market portfolio, real estate holdings, or investments, either, which surely make him one incredibly rich duck.

4) Scrooge McDuck’s net worth is beyond human comprehension

In Scrooge McDuck creator Carl Barks’ story The Second Richest Duck, Barks reveals just how much money Scrooge owns when all of his investments and dividends are combined. The total value? “One multiplujillion, nine obsquatumatillion, six hundred and twenty-three dollars and sixty-two cents.”

Of course, that made-up number is beyond human comprehension, especially if Scrooge’s money bin literally contains trillions. It’s likely that Scrooge is the richest person in cartoon history, easily surpassing The Simpsons’ Mr. Burns. The real world’s richest person—Bill Gates, at a net worth of $86 billion in 2017, according for Forbes—looks like a pauper by comparison.

5) The Duck family tree is an enormous labyrinth

Let’s be honest, Donald Duck has an enormous family. The connection between Huey, Dewey, Louie, and Donald has always been a little mysterious, in part because their father has never been revealed. And the nephews’ mother, Della Duck, is missing in the 2017 reboot, making the search for her an important cornerstone of the first season.

A gigantic family tree connects the Gadwalls, the Coots, the Ducks, and the McDucks, though it’s difficult to follow. Throw in the fact that the nephews’ father isn’t explicitly known, nor is there any canon description of his identity, and the Duck family is just downright complicated.

In fact, the DuckTales reboot tackles the family tree issue, with Webby taking a particular interest in the entire Duck legacy.

See what we mean? That’s some conspiracy-level stuff.

For the most part, Donald’s distant cousins don’t play a huge role in DuckTales, as most of the series is centered around Scrooge McDuck, the nephews, Webby, and Donald’s immediate family. But understanding the Duck family tree can help put the show’s family relations into perspective (even if it may take a solid hour or two to figure out all the different relationships). Check it out if you want to give it a look.

6) Before DuckTales, Scrooge McDuck starred in a Christmas special

Back in 1983, Scrooge McDuck featured as Ebeneezer Scrooge in a Disney Christmas special based on Charles Dickens’ A Christmas Carol. Called Mickey’s Christmas Carol, the film casts Scrooge as his namesake, with Mickey Mouse as Bob Cratchit and Goofy playing Jacob Marley.

That wasn’t the first time Scrooge McDuck had his own Christmas appearance, either. In fact, Scrooge McDuck was first introduced in Christmas on Bear Mountain, a 1947 comic from Disney’s iconic Carl Barks. The comic starred Scrooge as a cranky, old, rich duck hosting Donald Duck and his nephews for the holidays. Scrooge McDuck was always inspired by the Charles Dickens character, so it comes as no surprise that he was much less fun to be around when he first came on the scene.

7) The DuckTales video games have also made a comeback

If you were around for DuckTales’ original run in the ’90s, then you probably remember the NES and Game Boy DuckTales video game from Capcom. Notably well-designed for its time, the game remains popular today. So much so, in fact, that a 3D remake was created back in 2013 for PlayStation 3, Xbox 360, Wii U, and PC. A port was later released on mobile as well.

There was also DuckTales 2 for NES and Game Boy back in 1993, DuckTales: The Quest for Gold for home computers in 1990, and a mobile game called DuckTales: Scrooge’s Loot in 2013. Plus, DuckTales items and townspeople feature in the open-world game Disney Infinity, perfect for any Disney fans looking to add some references to the iconic series into their game’s world.

Donald, the nephews, and Scrooge all appear in the Kingdom Hearts series, as well, although there isn’t a separate DuckTales world included in the franchise. Not yet, at least.

8) Donald Duck’s voice was too confusing for the original

Everyone loves Donald Duck, but when the original DuckTales series was under development, Disney agreed that Donald wasn’t exactly built for the show. His voice can become annoying over time, and it’s extremely hard to understand what he’s saying because of how mumbled he sounds when he speaks. Turns out hearing a beloved Disney character quack-talk for 30 minutes is not exactly the best direction for a kid’s show.

So Donald Duck was sent off to the Navy in the original DuckTales, leaving the nephews with the much more elegant (and much more Scottish) Scrooge McDuck to look after them. Of course, the decision worked well, which is why the reboot has Donald cast as the main character but not the boys’ de facto leader.

Carl Barks gave birth to much of Donald Duck’s world in the Disney comics, including Scrooge and Duckburg itself. He’s since gone on to inspire the 2017 remake, with both his art style and paintings playing a major role in DuckTales’ updated look. But the original cartoon itself was significantly inspired by Barks’ original comics.

Writing for the A.V. Club, Todd VanDerWerff explains that DuckTales regularly took on serialized episodes, following Barks’ original comic book format. Some episodes, such as “Back To The Klondike,” were recreations of classic Barks stories. DuckTales itself is largely inspired by the Good Duck Artist, and even though Barks didn’t contribute to the show, his influence can be felt throughout.

10) The DuckTales reboot has already been renewed for season 2

Disney renewed DuckTales for a second season in March 2017, meaning there are at least two whole seasons of episodes coming on Disney XD. Of course, very little is known about how season 2 will progress, seeing how the first season is only just getting started. But Disney XD is pretty excited to keep the show running, suggesting the reboot could be a staple of the channel for some time.

“Fans around the world are eager, and we’re looking forward to introducing viewers to the all-new DuckTales,” Disney XD’s Marc Buhaj told Entertainment Weekly. “This early season 2 order is a testament to the quality work the creative team, led by Matt and Frank, and the cast are delivering.”