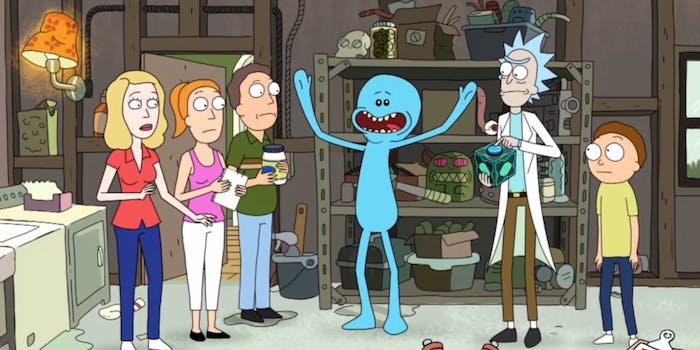 'Rick and Morty' fans love this guy—and you will too.

Mr. Meeseeks is a side character—or rather a race of side characters—that appeared on the hit Adult Swim animated series Rick and Morty.

Meeseeks come from a Meeseeks box—a blue cube with a button on top that surly scientist Rick Sanchez pulls off a shelf in his garage in the season 1 episode “Meeseeks and Destroy.” Rick doesn’t want to help his family with their boring chores, so he hands over the Meeseeks box with these instructions:

“This is a Meeseeks box. Let me show you how it works. You press this [button], you make a request… the Meeseeks fulfills the request, and then it stops existing.”

When Rick says the Meeseeks stops existing, he means it literally. Each Mr. Meeseeks (and all Meeseeks are named Mr. Meeseeks, by the way) disappears in a poof of smoke when he completes his task. Don’t worry—this is the natural order for Meeseeks, and you’ll soon see why.

After delivering the instructions on how to use the Meeseeks box, Rick hands it over with a word of warning, “Just keep your requests simple. They’re not gods.”

Rick’s family quickly gets to work making their requests. Summer, Rick’s teenage granddaughter, asks to be popular at school, while Summer’s mom, Beth, blurts out, “I want to be a more complete woman.”

Jerry, Beth’s husband, attempting to follow Rick’s instructions to keep it simple, asks his Mr. Meeseeks to help him take two strokes off his golf game. Rick goes off on an adventure with his grandson, Morty, but the Meeseeks remain a subplot for the rest of the episode. We soon find Beth and her Meeseeks commiserating over wine, as Mr. Meeseeks reassures Beth it’d be OK if she left her husband. (She does, but not until season 3.) At Summer’s school, Mr. Meeseeks arranges a pep rally to convince the student body that everyone should be friends with her—and it works. Poof, their two Meeseeks are gone.

But the seemingly simplest task doesn’t go so well. We find Mr. Meeseeks out on the golf course with Jerry as Jerry struggles to fix his form. Up until now, the Meeseeks have been nothing but optimistic, cheerful, and encouraging–a big reason why fans love Meeseeks so much. They declare “I’m Mr. Meeseeks, look at me!” frequently as a kind of catchphrase, in addition to the chipper, “Caaaaan do!” But when Jerry decides he’s ready to give up, Mr. Meeseeks becomes distraught, and he hits the button on the Meeseeks box to summon a second Meeseeks to help Jerry take two strokes off his golf game.

“Is he keeping his shoulders square?” the new Meeseeks asks in his charmingly shrill voice (provided by Rick and Morty co-creator Justin Roiland). “Ooo, he’s tryin’!” the first Meeseeks replies.

Fast forward a bit and we’re in Jerry’s living room, which is quickly filling up with new Meeseeks. Jerry’s original Meeseeks is starting to look rough, with stubble growing on his face and dark age spots appearing on his blue skin. “Meeseeks don’t usually exist this long,” Mr. Meeseeks says. “It’s gettin’ weird.”

When Jerry decides to go to dinner with Beth instead of continuing to practice, it’s the last straw for the horde of Meeseeks, who start blaming each other for their lack of success and continued existence. “I can’t take it anymore, I just wanna die!” shouts the original Meeseeks. “We all wanna die, we’re Meeseeks!” says another.

The Meeseeks start brawling—until one Meeseeks picks up the Meeseeks box and declares that nothing can be accomplished by fighting each other because none of them can die until Jerry takes two strokes off his golf game. He suggests they take all strokes off Jerry’s golf game by killing Jerry. The armed mob of Meeseeks track down Jerry at the restaurant and corner him and Beth in the restaurant’s walk-in refrigerator.

With hostages kneeling on the floor, one Mr. Meeseeks declares, “We are not born into this world fumbling for meaning, Jerry. We are created to serve a singular purpose, for which we will go to any lengths to fulfill. Existence is pain to a Meeseeks, Jerry. And we will do anything to alleviate that pain.”

Jerry realizes that Meeseeks are going to start killing people, and it’s all his fault. But Beth jumps into action, forcing Jerry to use a makeshift golf club to fulfill the Meeseeks’ task. Jerry putts a tomato into a soup pot to the cheers of “Ooooooo” by the Meeseeks. They quickly start poofing out of existence. One Meeseeks sticks around, saying he’s a kind-of-a-stickler Meeseeks, and he insists on seeing Jerry’s short game before also disappearing.

Though Mr. Meeseeks shows up for a cameo in the season 2 episode “Mortynight Run,” the above is pretty much the extent of Meeseeks screentime on Rick and Morty. Despite their brief appearance, Meeseeks have become beloved by Rick and Morty fans, inspiring a tabletop game and a spoofy infomercial.

Part of the charm of Meeseeks is that their looping dialogue is so quotable, but fans also seem to relate to Mr. Meeseeks’ deterioration from happy and helpful to frustrated and murderous. Meeseeks’ dark reality—that they’re chipper despite living in pain and wanting to die—also makes them extra sympathetic. Plus, it’s not unusual for fans of Rick and Morty to latch onto throwaway gags. Just look at the mysterious Plumbus and Rick’s sudden obsession with McDonald’s Szechuan sauce.

While Adult Swim has capitalized on Mr. Meeseeks’ popularity with waves of merchandise, the Rick and Morty showrunners have been careful not to overplay fan-favorite elements of the show. Co-creator Dan Harmon promised fans at San Diego Comic-Con in 2015 he’d bring Mr. Meeseeks back in season 3, but writer Ryan Ridley said more recently Mr. Meeseeks won’t appear this year.

That being said, Rick and Morty has long taken an anything-goes approach to surprises (including the unannounced airing of the season 3 premiere on April Fools’ Day), so we suggest Meeseeks fans keep an eye out for that friendly blue face in coming episodes.