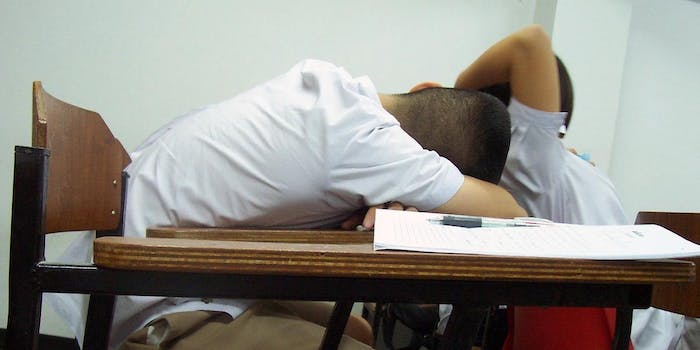 We should start our days later and sleep in more, says hero

Sleep scientists are closing in on proof that no one is truly a morning person.

We should all be starting our days later in favor of extended sleep, according to a University of Oxford researcher.

“We are generally a sleep-deprived society but the 14-24 age group is more sleep-deprived than any other sector of society. This causes serious threats to health, mood performance, and mental health,” Paul Kelley told the Guardian this week.

Through a project called Teensleep, sponsored by the Education Endowment Foundation, Kelley is pushing for high schools in the U.K. to push their schedules to start later in the day—as late as 11am.

According to a paper Kelley and his colleagues published in 2014, the sleep-wake cycle is mediated by a neurological “pacemaker” in the brain. But the opposing forces of that cycle—the drive for sleep and the drive for wakefulness—conspire to create a period of wakefulness in the early evening hours that makes it pretty much impossible to go to sleep. This is why, even if you’ve been tired and sleep-deprived all day, you may struggle to fall asleep if you go to bed at seven or eight.

But in teenagers, the overall sleep-wake cycle is shifted later, causing that impossible-to-fall-asleep period to shift later as well. In other words, teenagers are wired to go to bed late and sleep late.

The current state of teenager school schedules doesn’t just make them groggy, Kelley told the Guardian. It also leads to a host of changes in the way their genes are expressed in as little as a week.

And technology doesn’t help either, he added. The light emitted by the phone and tablet screens we like to stare at can mess with the internal sleep-wake pacemaker and push back the cycle even deeper into the night.

This research is coming on a large body of literature about human sleep-wake cycles which can, at times, seem confusing. While most doctors and experts will say that a solid eight hours of sleep at night is best for health (and they have lots of evidence to back that up), it’s not clear that is the “natural” way of human sleep.

Prior to urbanization, well-lit streets, and the eight-hour workday, people tended to live far away from one another and dictate their own schedules. According to historical records, and a few clever studies, the natural human sleep cycle is a segmented one. In the past, people would go to sleep shortly after dusk, wake up for a few hours in the night, and then sleep again until dawn.

But times change and humans do along with it. Perhaps Kelley’s work will at least help strike a nice compromise for teenagers.