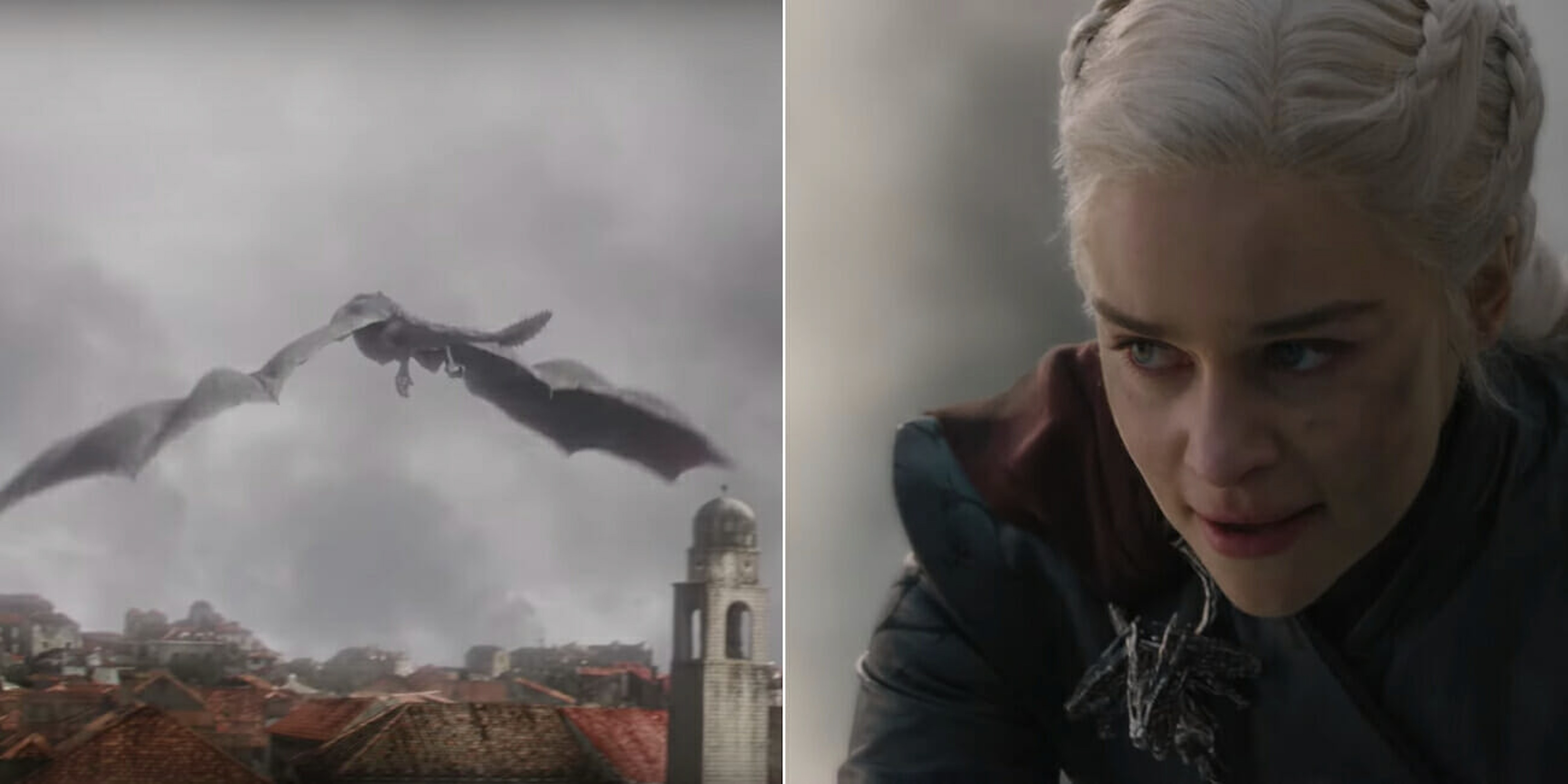 We’ve reached the penultimate episode of the entire series, but it feels like all the years (and thoughts and feelings) we’ve invested in this show went up in flames along with King’s Landing Sunday night.

Everyone is upset, to say the least. And this is after Daenerys Targaryen went ahead and did exactly what everyone wanted her to do after last week’s episode: go full Mad Queen and burn King’s Landing to the ground.

The battle between Dany and Cersei Lannister’s forces started out exhilarating enough: Dany only needed one dragon, Drogon, to lay waste to Euron Greyjoy’s Iron Fleet and all the other scorpions lining the walls of King’s Landing, not to mention the Golden Company, which Dany and Drogon decimated. This gave Jon Snow, Grey Worm, Davos Seaworth, and the remaining Dothraki and Unsullied the opening to attack the rest of Cersei’s forces, who eventually surrendered. Just take out Cersei, and then Dany is assured her victory.

But what happened next made absolutely no sense to people. As @targarcyn observed on Twitter, Dany “hears bells of surrender and for some fucking [absurd] reason starts killing innocents.”

If you feel like you’ve been played, just imagine that’s exactly what Tyrion Lannister and Jon must be feeling after the events of that episode—especially after Dany just proved the warnings of Varys (bless his soul) and Sansa right.

After such a sad and awful episode, fans turned Dany ignoring the bells—and Jon and Tyrion realizing their mistake—into a mother load of memes.

Dany ignoring the bells and torching King’s Landing was one of the most memed moments of Sunday night’s episode. After realizing that Dany fully intends to attack King’s Landing with Drogon, Tyrion pleaded for her to make her troops fall back once the bells toll to signal the surrender of Cersei’s forces. Dany reluctantly allowed this with a nod at Grey Worm. The bells eventually tolled, but Dany chose to ignore them, prompting fans to flood Twitter with memes of Dany “pretending” to not hear the bells.

It was a big enough moment to warrant ubiquitous SpongeBob memes to make the same point.

Dany when she heard the surrender bells ring #gameofthrones pic.twitter.com/GKqtHfl4wA

To many fans, Dany may as well have been wearing noise-canceling headphones for all the attention she paid those bells.

Or were they AirPods?

Dany the bells rang! They surrendered!
OH MY GODS SHE HAS HER AIRPODS IN! SHE CAN'T HEAR US! #gameofthrones pic.twitter.com/zUS2c6r8md

They gave up it's finally ov-
OH GOD OH NO DANY'S WEARING AIRPODS SHE CAN'T HEAR THE BELLS #GameofThrones #GoT pic.twitter.com/4VwaRn4LjC

The Michael Jordan “Fuck them kids” meme that has been making the rounds all season reared its head in the midst of all the reactions to Dany ignoring the bells.

Kings landing: we give up, ring the damn bells.

And so did Dany’s passive-aggressive smile from this season’s second episode.

@yourealobster thinks Dany might as well be saying “The bell doesn’t dismiss you. I do,” in true Mad Queen fashion.

There are people who are proud of what she did.

Frustrated Tyrion probably feels like he’s “a joke” to Dany after she ignored the bells and attacked, according to fans.

#GameofThrones
Tyrion: Call off the attack if the bells ring

Tyrion: When the bell rings, call back your men

Many think Tyrion and Jon should have seen it coming; and for their appalled reactions to what Dany ended up doing, they were mercilessly meme’d on Twitter, too.

Me, Jon, and Tyrion : oh thank God , that was a close one

Me , Jon, and Tyrion : pic.twitter.com/Ca7NFga5jr

tyrion, jon, and ser davos when they realized daenerys really is the mad queen#gameofthrones pic.twitter.com/UJbMXVex9o

jon, ser davos, and tyrion when dany ignored the bell and burned them all #gameofthrones pic.twitter.com/LiG8qanssK

Fans think Jon may have realized too late the huge mistake he made in bending the knee to Dany.

Jon: SHE IS MY QUE-
Jon as soon as he sees the fire:#GameofThrones pic.twitter.com/2iF9Q10Vuw

Jon at the start of the episode: you’ll always be my queen

Tyrion and Jon after Dany started burning all of king’s landing to the ground #GameOfThrones pic.twitter.com/iZ544Wo3ty

People are posting about just how wild the next episode will be when Jon and Dany meet after this madness.

But fans believe if there’s anyone who can say “I told you so,” it’s Sansa, Arya, and Varys, who have warned Jon and Tyrion about the Mad Queen this whole time.

I wish Varys was alive to say “I told you so” to Tyrion. #GameofThrones pic.twitter.com/pCHrAL2E8x

Jon and Tyrion when they have to go back and admit that Sansa was right#GameOfThrones #GoT pic.twitter.com/5evBWFT98W

Sansa warned you. Arya warned you. Varys warned you. Neither of you listened and you betrayed Varys, Tyrion. “You don’t know her” #GameofThrones pic.twitter.com/A9wmNz6jte

Sansa, arya, varys and almost everyone else: she's crazy
Jon and tyrion: nah she alright
Jon and Tyrion in Episode 5:#GameofThrones pic.twitter.com/HRd82SxjwI

Jon to Sansa when (if) he makes it back to Winterfell #GameofThrones #DemThrones pic.twitter.com/epebDkuDBU

With only one episode left in a series that has always been foreshadowed to be as mad as Dany, are we even surprised that this is how audiences and superfans have been played? We’ve been warned this whole time.