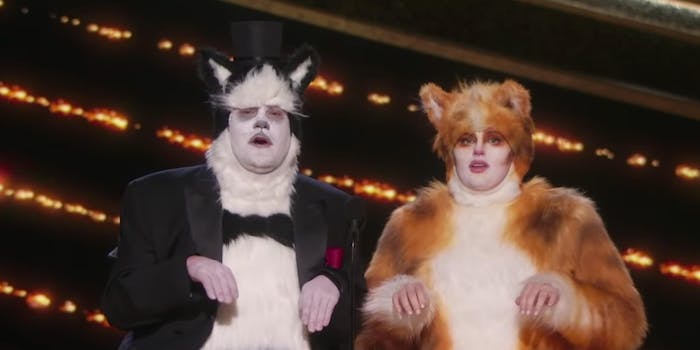 'The best visual effects in the world will not compensate for a story told badly.'

The comment came as the two Cats co-stars arrived on-stage in furry catsuits and makeup to present the Oscar for visual effects. (The Oscar would go to 1917.)

“As cast members of the motion picture Cats,” Wilson started.

“Nobody more than us understands the importance of—” Corden continued.

“Good visual effects,” they said together as Wilson noticeably grimaced as the crowd laughed at the joke.

Cats was shortlisted in this category but didn’t receive an Oscar nomination. But it’s also a quintessential joke of a film that’s both critically panned and a massive studio flop. The joke demonstrated that Corden and Wilson are able to laugh at themselves (even as the cast distances itself from Cats) while taking a shot at one of the most-criticized aspects of the film: The visual effects, which had an element of the uncanny valley and not being completely finished upon the film’s release.

However, the Visual Effects Society didn’t take kindly to the joke. In a statement, it pushed back that the visual effects were the reason why Cats failed at the box office.

“Last night, in presenting the Academy Award for outstanding visual effects, the producers chose to make visual effects the punchline, and suggested that bad VFX were to blame for the poor performance of the movie Cats. The best visual effects in the world will not compensate for a story told badly. The Visual Effects Society is focused on recognizing, advancing and honoring visual effects as an art form — and ensuring that the men and women working in VFX are properly valued.

On a night that is all about honoring the work of talented artists, it is immensely disappointing that The Academy made visual effects the butt of a joke.  It demeaned the global community of expert VFX practitioners doing outstanding, challenging and visually stunning work to achieve the filmmakers’ vision.”

The jab against Cats’ visual effects from Wilson and Corden also highlighted a grim reality for many of those who work in visual effects. They’re blamed for work delivered under a potential time crunch, limited by its budget, or ordered by the people who hire them with bad ideas; redesigning the VFX due to audience backlash, as was the case with Sonic the Hedgehog, can often exacerbate those issues. And even then, the artists who are blamed for VFX issues out of their control suffer the consequences. For example, the studio behind the Sonic redesign (which also contributed to Cats) shut down.

“Hey guys I haven’t watched all of the Oscars but I assume these two were really classy and thanked me for working 80 hour weeks right up until I was laid off and the studio closed, right?” Yves McCrae, who worked on the visual effects for Cats, tweeted.

Cats will ultimately lose Universal a lot of money, but it may have finally found its niche, flaws and all. A series of “rowdy screenings” (in which audiences are allowed to be loud as they react to a film) for Cats have popped up at several Alamo Drafthouse theaters. And while some people are almost definitely watching Cats ironically, Cats may have earned some genuine fans along the way.