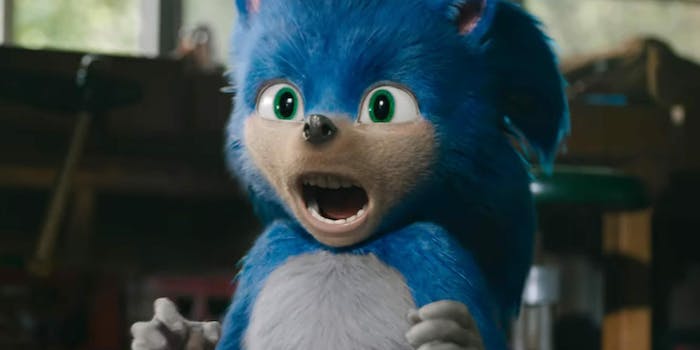 A lot of VFX artists will have to work serious overtime for this.

Sonic the Hedgehog’s director has promised to redesign Sonic’s appearance in the movie, following backlash (OK, more like mockery) from fans.

The first Sonic trailer was met by an atmosphere of disbelieving derision, as people reacted to the arrival of a) a live-action Sonic movie set in the real world, b) Jim Carrey resurrecting his mid-’90s comedy schtick, and c) a creepily realistic CGI Sonic with human teeth. Soon enough, fans were posting their own stylized redesigns of the character.

CGI movie Sonic is a textbook example of the uncanny valley. With meticulously crafted fur and a slightly-too-humanoid physique, he just looked… weird. Sonic’s human teeth became an overnight meme, with one reporter even interviewing dentists to explain why this lovable cartoon hedgehog suddenly looked like a monster. Apparently, this reaction inspired panic at Paramount, with Sonic the Hedgehog director Jeff Fowler responding late Thursday.

“The message is loud and clear… you aren’t happy with the design & you want changes. It’s going to happen,” he wrote. “Everyone at Paramount & Sega are fully committed to making this character the BEST he can be…”

This is an unprecedented move for a film that comes out in just six months. While movies often re-shoot some scenes after test screenings, Paramount seemingly plans to overhaul Sonic’s entire main character. As many people have pointed out on social media—especially those who work in the animation and video game industries—this probably means months of intensive overtime for the film’s VFX staff.

While crunch work is a more widely discussed problem in the video game industry, it’s also an issue for VFX artists. Thanks to the growing demand for CGI, visual effects companies have to juggle multiple projects at once, with employees encouraged to work overtime. Artists have less chance to specialize, and films often get spread over several different companies, which rarely leads to positive results.

Sonic’s redesigns are exactly the kind of thing that leads to crunch time, as the studio tries to fix Sonic’s appearance without going too far over-budget. Basically, staffers have six months to re-do a character whose original design already appeared on posters in December 2018 (to immediate mockery) and who featured in completed shots in a trailer this week.

It’s hard to imagine the changes being a drastic improvement in the film overall. Sonic’s weird appearance got a lot of attention, but it’s not like it was a single flaw in an otherwise great-looking movie. With its dated atmosphere and baffling concept (why try to make a Sonic movie look realistic, anyway?), the trailer suggested that Paramount doesn’t understand Sonic’s appeal in the first place.