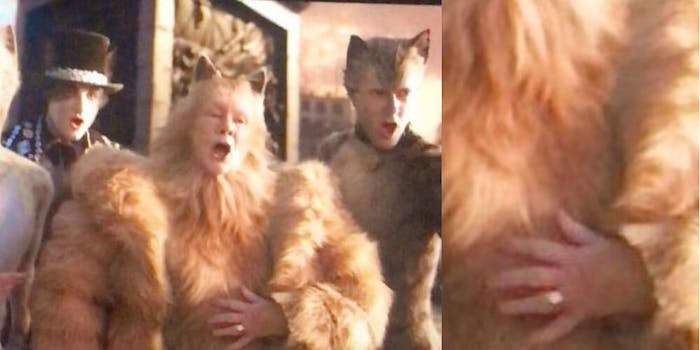 'Wedding ring and all.'

Cats is turning out to be the holiday gift that keeps on giving. Assuming the gift you wanted is a spectacular failure that somehow just keeps getting more and more ridiculous with every day that passes. The latest? Let’s talk about Judi Dench’s hand.

The final editing of the film was notoriously last minute, with director Tom Hooper admitting he finished “the final cut” the day before Cats premiered to the world. However, things got even crazier on Saturday when it was announced that Universal would be releasing a revised version of the movie, at the insistence of Hooper. This new version supposedly contains improved visual effects.

How to tell if you’re seeing the original theatrical release of Cats or the new and “improved” version? That’s where Dench’s hand comes in.

This isn’t a joke: CATS was rushed into theaters before being finished so a new version is being sent to theaters with updated effects. How do you know if you have the old version? Look for Judi Dench’s human hand, wedding ring and all. pic.twitter.com/VDUOevePU9

That’s right, apparently, the official release of Cats was so haphazardly put together that they somehow missed removing Dench’s actual hand and wedding ring in one shot. That’s like, a Daenerys Targaryen drinking Starbucks level mishap.

“So will the version of CATS with Judi Dench’s ring-hand be known as ‘The Diamond Cut?'” one user questioned.

Others insisted it was time to rush to the theater to catch the unedited version before it was potentially lost for good.

“I am seeing CATS tomorrow and I’m so scared the patch will arrive overnight I wanna see Judi Dench glitch thru a wall and Ian McKellen with rag doll physics,” Canadian writer Anthony Oliveira tweeted.

So will the version of CATS with Judi Dench's ring-hand be known as "The Diamond Cut"?

No. It must go back to 17% to maintain balance with Cats & Dogs. pic.twitter.com/YwCrdo5Ww9

“In this new version, all of the cats are anatomically correct.” https://t.co/ZuECgdtVAw

Also did they remove the babadook or pic.twitter.com/imbqAz5quH

The record stood for 2 months. After the Judi Dench Human Hand patch no one could beat the previous record

But then, Xx_iCarely_Yoshi_xX found the holy grail of the Cats Speed run: Jason Derulo's unedited dick.

CINEMAS MUST REJECT THE CATS PATCH

GIVE US THE UNBLEMISHED BLEMISH

Some theaters are expected to download the patch on Sunday, destroying the Cats we’ve all been talking about. Other theaters may continue showing the original version up until Tuesday. Either way, if you want to catch this anatomically incorrect musical nightmare before it becomes… probably only slightly less nightmarish, you better move quick.