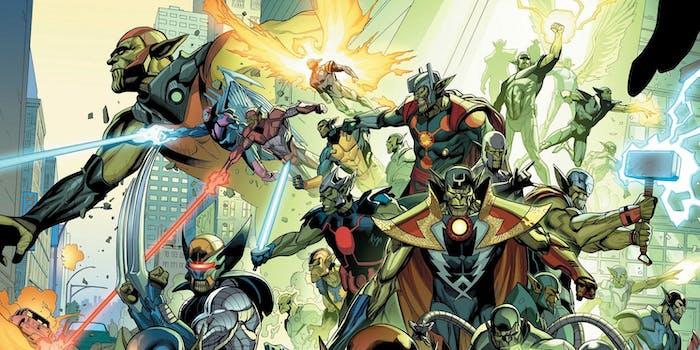 Who are the Skrulls in ‘Captain Marvel’?

Here's what you need to know about the shape-shifting alien villains.

With the arrival of the first photos from Captain Marvel, we’re glimpsing a new era for the MCU. Alongside Captain Marvel herself—reputedly the next Avengers team leader —this movie will introduce a galaxy-shaking conflict to the franchise. We’re talking, of course, about the Kree/Skrull war.

The Kree and Skrulls are a pair of alien races from Marvel Comics, and they’ve been at the center of several epic storylines. Captain Marvel is their first major role in the MCU, causing furious speculation in Marvel fandom. They’re also already a meme, because our first photo of the Skrulls is less “terrifying alien menace” and more “boyband album cover.” Well, at least it’s an appropriate choice for a movie set in the 1990s.

As with any new alien in a popular franchise, there’s plenty of debate over whether the Skrulls look amazing or like low-budget TV characters. However, we’re going to bypass that drama in favor of explaining who they actually are.

Who are the Skrulls in Marvel Comics?

The Skrulls are reptilian aliens with shapeshifting powers. Their civilization is an empire spanning many planets and systems, embroiled in a centuries-long war with their mortal enemies, the Kree. The original Kree-Skrull War arc was published in 1971, setting the scene for a sequence of epic space opera Kree/Skrull storylines in the following decades.

We won’t attempt to summarize the plot here, but the first Kree-Skrull War series features the Avengers, the original Captain Marvel (a Kree hero), and a massive cast of alien warriors and leaders.

Modern readers may be more familiar with the 2008 Secret Invasion storyline, which leaned into the Skrulls’ shapeshifting abilities. It revealed that numerous Skrulls had secretly infiltrated human society, replacing various superheroes including Elektra, Hank Pym (Ant-Man), and Spider-Woman. There’s already speculation that the MCU could introduce this concept retroactively, by revealing that certain characters were secretly Skrulls all along.

There are dozens of Skrull characters in the comics, but hardly any of them are well known outside of Skrull-centric story arcs. Unless you’re already familiar with the Skrulls (in which case, why are you reading this?), you’re more likely to recognize Hulkling from Young Avengers, a rare Kree/Skrull hybrid, or Xavin from Runaways, a character who illustrates the gender-fluidity of Skrull identity and physiology.

Meanwhile, there are plenty of well-known Kree characters including the original Captain Marvel (Mar-Vell), Ronan the Accuser, Doctor Minerva, and Carol Danvers herself, who is technically part Kree. The Inhumans also play a tangential role in this conflict, since they were originally created from Kree genetic experiments.

Thanks to the size of their empire and their advanced technology, the Skrulls represent a serious threat to Earth. Their shape-shifting abilities allow them to disguise themselves as basically anything with a similar mass to their own body, including animals and inanimate objects.

What are the Skrulls doing in Captain Marvel?

Up until now, the Skrulls basically haven’t appeared in the MCU. We saw Kree characters like Ronan (Lee Pace) and Korath (Djimon Hounsou) in Guardians of the Galaxy, along with some (probably unrelated-to-the-movies) Kree in Agents of S.H.I.E.L.D., but Captain Marvel marks the Skrulls’ cinematic debut.

READ MORE ON THE MARVEL PHASES:

From what we saw in Entertainment Weekly‘s Captain Marvel cover story, the movie puts Carol Danvers on the Kree team from the start. She begins the movie in an elite squad of Kree heroes commanded by Jude Law (almost certainly playing Mar-Vell), and returns to Earth to tackle a Skrull invasion.

The main Captain Marvel Skrull photo shows a group of green-skinned aliens walking out of the ocean, but we also know they’ll be in disguise as humans. Ben Mendelsohn’s character Talos (a Skrull commander) will go undercover as a human inside S.H.I.E.L.D., potentially coming into contact with Phil Coulson and Nick Fury.

Since Captain Marvel takes place in the ’90s, it’s perfectly plausible to imagine a post-credits scene setting up a long-term Skrull sleeper agent among the main cast of the later Marvel movies.