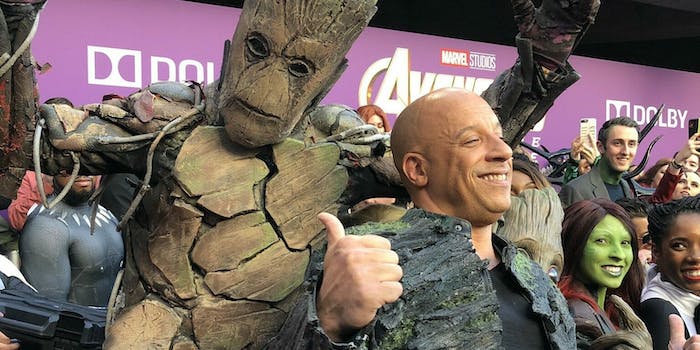 3 things we saw at the ‘Avengers: Endgame’ premiere

While Marvel is keeping a tight lid on Avengers: Endgame spoilers, last night’s premiere gave fans plenty to talk about. The film’s all-star cast turned out to celebrate the biggest superhero franchise of all time, kicking off with what may be Robert Downey Jr.’s final Tony Stark entrance to the red (actually purple) carpet. It was an emotional night for many, with Chris Evans admitting that he cried “like six times.”

Our spoiler-free review will arrive soon, but in the meantime, here are the top three things we spotted at the Endgame premiere—including one genuinely surprising guest.

Brie Larson and Scarlett Johansson are both known for choosing great red carpet looks, and this time the attention went to their accessories. Both actors wore variants of the Infinity Gauntlet, with Larson wearing rings and a bracelet while Johansson selected a more complicated arrangement with chains connecting to the orange Soul Stone.

Incidentally, if you want some Infinity Gauntlet jewelry of your own, you can totally get a cheaper version on Etsy.

Vin Diesel‘s Marvel career consists of saying the same three words over and over again, but he sure makes the most of it. He seems to seriously enjoy playing Groot, and after showing up to previous premieres on stilts and wearing a twig-covered jacket, he really outdid himself with this outfit:

3) Natalie Portman was there

Most of the big names on the purple carpet were either Endgame stars or, in the case of Luke Hemsworth and Miley Cyrus, closely related to Endgame stars. Natalie Portman, however, was a surprise arrival. She’s one of the few actors to quit the MCU early, departing the Thor franchise after just two movies. Does her unexpected appearance mean she has a cameo in Endgame? Or will she even return for another Thor movie? Perhaps unsurprisingly, her IMDb page doesn’t list her as an Endgame participant.

Portman doesn’t seem like the kind of person to show up to a three-hour superhero movie just for funsies, so this could be a sign that she’s returning to the franchise. If so, here’s hoping they go the comic book route of Jane Foster becoming the new Thor.