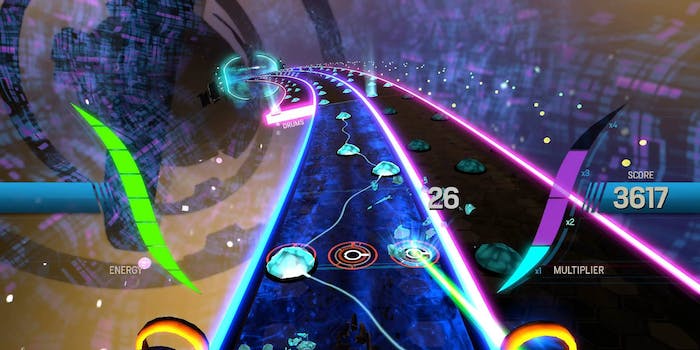 Amplitude wasn't the experienced we hoped it would be.

I’ve been playing video games for a long time. Though there are definitely players out there who have faster reflexes, but I can hold my own. But here I am, writing this review for Amplitude, and I’m conflicted. Am I the problem—or is the game just poorly designed?

Amplitude is the latest game from Harmonix, the same team behind Rock Band, the music rhythm game that saw a reemergence late last year. Rock Band is a ton of fun. It has cool plastic instruments, great song selection, and presents a unique and rewarding challenge.

Amplitude is like a more stripped down version of Rock Band. Instead of a plastic guitar, you have a PlayStation 4 controller. The note highway has three buttons instead of five. In Amplitude, you use the L1, R1, and R2 buttons to hit a stream of notes as they bombard down the screen. The difference between Amplitude and Rock Band is that you have to jump between different instrument parts. A song is broken down into instruments, which is then broken down into measures. Complete one measure successfully, it will disappear, and using the D-pad you must switch to a different instrument on the highway.

Before we get into the minutiae, it’s worth mentioning that Amplitude has an interesting history. It launched a Kickstarter in summer of 2014 to muted attention. As the Kickstarter neared its end, it became clear that the game might not reach its $775,000 goal. That’s when many gaming sites started to champion the game, discussing how great the first entry was on the PlayStation 2. The Kickstarter was successfully funded, and the gaming community gave itself a congratulatory pat-on-the-back for resurrecting this indie rhythm cult-classic.

But here we are in 2016, with an update to the PS2 game of yore, and things look a little plain. Open up Amplitude and you’ll notice the complete lack of fanfare. The menus are very basic, giving the presentational quality of a mobile game. You will be presented with two modes: campaign and quickplay. In campaign you select a difficulty, play a set of four songs, then move on to another set of four songs. Quickplay just has you playing songs a la carte. The campaign mode lacks a proper progression system. Normally campaign modes are meant to introduce players to a new game, demonstrating how the mechanics work and nudging you to utilize them for the best possible score. Amplitude does none of that. You could play all the songs in quickplay and still get the same effect.

That means most players will stick to quickplay. The quickplay menu is simple enough: You pick a difficulty, a song, and a beat blaster. It’s never specified if a particular blaster nets you different benefits or rewards, but I’m pretty sure it’s all the same. At first, blasting away at notes feels great, much like playing Rock Band. It’s switching between instruments where problems start to arise.

Amplitude is constantly keeping track of your performance. Your goal is to finish as many measures in succession without making a mistake, as it nets you a higher multiplier. What I found is that when you’re forced to switch to a different instrument, sometimes the game just screws you over. That’s not an elegant way to describe it, but that’s what happens.

Sometimes when an instrument highway disappears and you’re forced to move to the adjacent one, you’re penalized. Why? It’s because you missed the note when switching. At first I thought that it must have been my fault. That there must have been a small window of time for me to switch to the next instrument and still hit that note. Turns out that yes, sometimes you do have just a few frames to switch and still hit that note. But other times I found that when one highway disappeared, the next highway was already halfway through, meaning that it would have been impossible for me to get there in the first place.

Maybe I’m just playing the game incorrectly. It’s not like the game ever explained it to me. As frustrating as it is to miss a note in Rock Band, at least you know it’s your fault. You know that if you practice, you can perfect that guitar solo. With Amplitude, you feel cheated. Maybe there is an ideal way to run through a song that doesn’t dump you between highways. If there is, I haven’t found it, and that screams of ill-planned design.

In Rock Band, the note highways are in cleanly presented columns. Amplitude has highways that curve around. If you’re on the right-most highway, the nearest highway may be four lanes down in your blind spot. Being forced to switch to a highway you can’t see, potentially missing a note, is bad design.

Frustrated as I watched multipliers reset, I thought maybe I could find some solace in a good track list. Well, dumbfoundingly, the setlist in Amplitude is bad. Many of the songs are made by Harmonix itself, with various contributing artists adding to the selection. Of the 30-some tracks, two or three are actually good. Most songs sound like mishmashes of other songs. But not only that, they’re all painfully generic.

Visually the game looks like a really cool screensaver. Granted, most of your attention will be trained on the note highway. I mean how often did you look up to see what your Rock Band avatars were doing onstage? It’s smooth, running at a solid 60 frames-per-second. But something as simple as a note highway is really hard to screw it up, right? Somehow, Harmonix did that as well, in one instance at least. During the campaign mode, while playing the bonus songs, the note highway appears in this red, blue, and green trainwreck. It’s like watching an anaglyph 3D movie (the kind that requires those red and blue glasses) without the glasses. It gave me a headache. Luckily, it was just one instance.

Amplitude is a let down. I really wasn’t sure what to expect when jumping in, but it did not live up to its PS2 predecessor. I’m genuinely a fan of rhythm games, and I have yet to play a rhythm game that I did not like. Amplitude sadly missed the mark. It feels bare, awkward, and incomplete. There isn’t a ton of content and the song selection won’t keep players hooked. Maybe this is one Kickstarter the gaming community should have passed on.