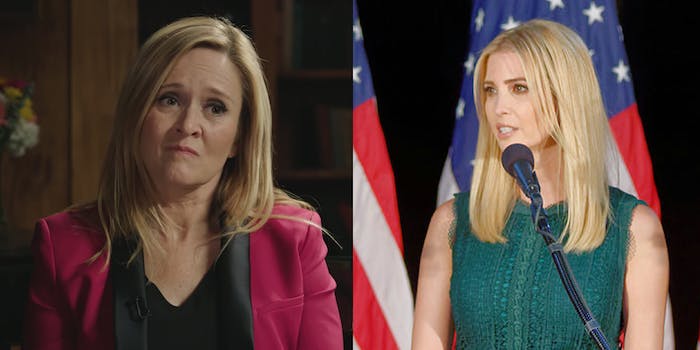 The prediction drew gasps from the crowd.

Full Frontal host Samantha Bee had a surprising prediction about the future of the United States on Tuesday night.

Speaking at the New York Comedy Festival, Bee was asked if she thought a woman would be elected president during her lifetime. The host’s prediction was probably not what you’d expect.

Ivanka Trump will be the first woman president of the United States, Bee said, drawing audible gasps from the crowd.

“I feel so sad that you asked me that question because I’m gonna give you my honest answer… It’s gonna ruin everyone’s night,” she said, before making the surprise prediction. “I’m not joking… I’m so sorry that I said that.”

Actress Ana Gasteyer, who was speaking with Bee, said she couldn’t back up the surprise prediction but did say she thought America would go into “an era of dumb shits who are popular,” adding someone from the Real Housewives series could be elected to the nation’s highest office.

“I think this is all just about charisma and popularity,” she said. “He’s the most hateful, horrendous, tremendously terrible leader, but something about Americans needs to have people that they recognize from television.”

Ivanka Trump serves as an unpaid adviser to her father, President Donald Trump.