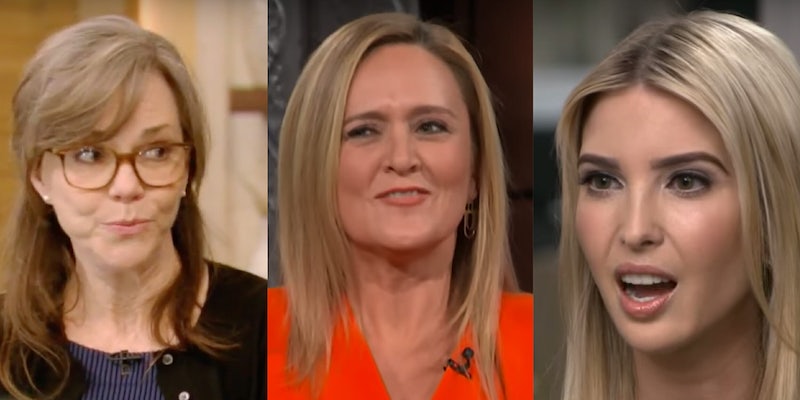 On Full Frontal With Samantha Bee Wednesday night, Bee called Trump a “feckless cunt” for posting a photo of herself hugging her child amid outcry over ICE separating parents from their children. Bee’s comment was met with full-force outrage, including from the White House, which said her words were “vile and vicious.”

Bee has since apologized in a statement. Field on Thursday tweeted her take.

“I like Samantha Bee a lot, but she is flat wrong to call Ivanka a cunt,” she wrote, adding this kicker: “Cunts are powerful, beautiful, nurturing and honest.”

I like Samantha Bee a lot, but she is flat wrong to call Ivanka a cunt.

Bee’s comment came on the heels of the cancellation of Roseanne, and many conservatives were calling for Bee to face equal consequences.

“Her disgusting comments and show are not fit for broadcast, and executives at Time Warner and TBS must demonstrate that such explicit profanity about female members of this administration will not be condoned on its network,” White House press secretary Sarah Huckabee Sanders said.

Bee said her words were “inappropriate and inexcusable,” and TBS backed up her apology with a tweet Thursday.

Samantha Bee has taken the right action in apologizing for the vile and inappropriate language she used about Ivanka Trump last night. Those words should not have been aired. It was our mistake too, and we regret it.

Two advertisers, Autotrader and State Farm, have said they would “suspend sponsorship” of Bee’s show, according to the Hollywood Reporter.