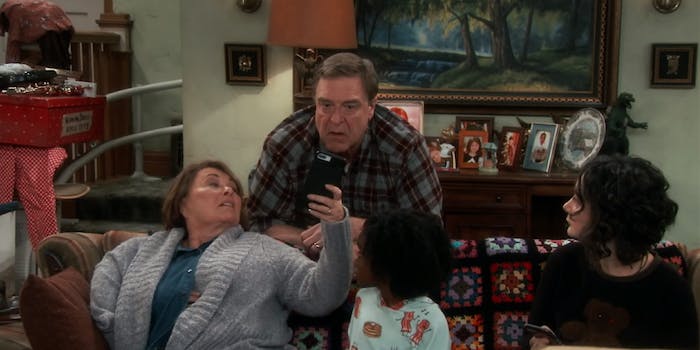 ABC said her tweet was 'inconsistent with our values.'

Just two months after its debut, ABC has officially canceled its reboot of Roseanne following a racist tweet from the show’s leading actress Roseanne Barr.

On Tuesday, ABC’s president Channing Dungey issued a short statement: “Roseanne’s Twitter statement is abhorrent, repugnant, and inconsistent with our values, and we have decided to cancel her show.”

The “statement” referenced in ABC’s statement appears to be a now-deleted May 29 tweet in which Barr compared former Obama aide Valerie Jarrett to an ape, saying that “muslim brotherhood & planet of the apes had a baby = vj.”

Barr apologized in another tweet, saying she “should have known better,” but this is hardly the first racist or divisive comment she’s posted. Barr has been allowed to peddle and retweet dangerous conspiracy theories—like that Democrats are leading a pedophilia ring—and tweet racist, transphobic “statements” for years.

That didn’t let up after her show, which is framed as a look at a white working-class family with political differences, returned to the air in March. President Donald Trump’s tweet of approval only made the show more divisive, but that might have been by design.

Roseanne was granted a second season after its rating bump, but earlier this month the show lost its co-showrunner Whitney Cummings, and earlier today (before ABC’s statement) consulting producer Wanda Sykes said she won’t be returning.

I will not be returning to @RoseanneOnABC.

Co-star Sara Gilbert tweeted out her reaction as well, saying Barr’s comments about Jarrett, “and so much more, are abhorrent and do not reflect the beliefs of our cast and crew or anyone associated with our show.”

Roseanne’s recent comments about Valerie Jarrett, and so much more, are abhorrent and do not reflect the beliefs of our cast and crew or anyone associated with our show. I am disappointed in her actions to say the least.

Unsurprisingly, a contrarian movement has appeared, asking people to #boycottABC. The majority of the tweets with the hashtag claim the show’s cancellation is a blatant suppression of free speech by ABC, and bot accounts appear to be activated by the news.

In the aftermath of the outrage over her comments, Barr tweeted she would be “leaving Twitter.” As of this writing, her account is still active.