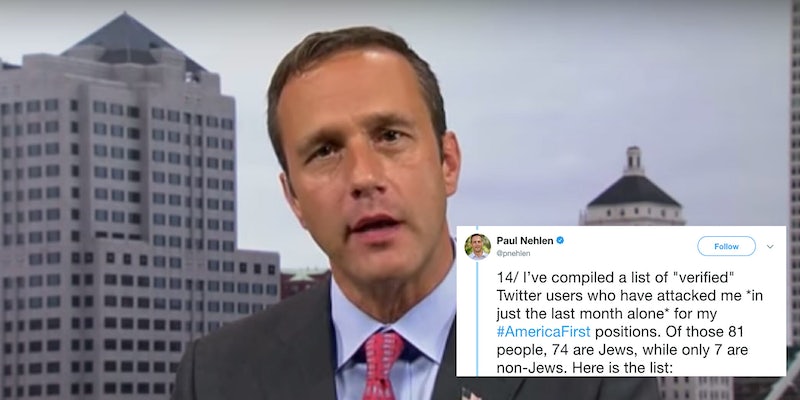 Nehlen plans to run against Paul Ryan in 2018.

Republican congressional candidate Paul Nehlen has compiled a list of verified Twitter users he says have attacked him for his political views, classifying each person as “Jew” or “non-Jew.”

Over 4,400 Twitter users have responded to the tweet, most slamming it as anti-Semitic while a minority of users and trolls celebrate it.

Nehlen is best known for running against House Speaker Paul Ryan for his Wisconsin seat in the 2016 primary. At the time, this earned Nehlen the support of former White House chief strategist Steve Bannon and positive coverage from conservative media outlet Breitbart News. Nehlen lost by a 68 percent margin to his high-ranking Republican rival.

In recent months, Nehlen, a businessman, has been slammed for increasingly controversial statements in which he attacked his critics for being “shekels-for-hire.” He also tweeted that he’d been reading The Culture of Critique—a trilogy of books by psychology professor Kevin MacDonald widely denounced as anti-Semitic.

It wasn’t until after Nehlen appeared on a white supremacist podcast called Fash the Nation in December that Bannon reportedly cut ties with Nehlen.

“Nehlen is dead to us,” Bannon advisor Arthur Schwartz told CNN at the time.

It was then that a BuzzFeed News expose, published on Jan. 12, revealed direct messages from Nehlan in a private Twitter group of dedicated supporters called CityRevoltVoteNehlen in which he promised to “decimate” his enemies “working for Jewish media.”

“There are a list of goys attacking me, and a separate list of Jews,” the article claimed Nehlen messaged into the group.

Tuesday’s lengthy Twitter thread primarily takes aim at the BuzzFeed article, and it’s in that context that Nehlen’s list appears. The list includes people like CNN’s Jake Tapper and conservative commentator Ben Shapiro—perhaps indicating who Nehlen might have been referring to in the BuzzFeed screenshots.

Addressing the article’s assertion that his comments were anti-Semitic, Nehlen refuses to back down on his reference to a “Jewish media” and calls it a “well-founded observation.”

Nehlen then claimed that a personal investigation into the BuzzFeed article revealed Twitter employees had leaked the screenshots from his private group to the publication.

This point was immediately refuted by reporter Charlie Warzel, who wrote the article and refused to expose his sources.

I absolutely will not reveal my sources — but safe to say that this claim by Paul about our story on his DM groups is 100% untrue. https://t.co/c9yemDp6H4

As Nehlen’s thread gained more attention, a large portion of it suddenly disappeared. Nehlen further claimed, without substantiation, that Twitter had “forced” him to delete a whole section of his thread.

This proved the perfect opportunity for the Republican to talk about his proposed #ShallNotCensor legislation, a bill he hopes will tackle “the social media censorship problem” and “end the radical left’s silencing of conservative voices on major social media platforms,” as well as promote his #NoCuckZone merch.

Nehlen is set to run against Ryan again for the same seat in the 2018 midterms.