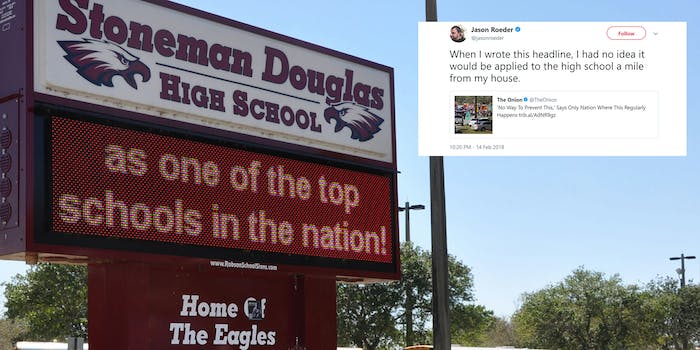 The tragically common Onion headline hit all to close to home for its author.

Each time a new mass shooting occurs in America, satirical website the Onion publishes a story about it with the same chilling headline: “‘No Way To Prevent This,’ Says Only Nation Where This Regularly Happens.”

The man who wrote the headline is former Onion editor Jason Roeder. On Tuesday, he tweeted that Marjory Stoneman Douglas High School in Florida, the location of the mass shooting that left 17 people dead on Feb. 14, is eerily close to his home.

“When I wrote this headline, I had no idea it would be applied to the high school a mile from my house,” he wrote.

When I wrote this headline, I had no idea it would be applied to the high school a mile from my house. https://t.co/Vm1jCaiugo

The publication recycles both the headline and the main body of the story over and over again to mock the country’s response to deadly mass shootings:

At press time, residents of the only economically advanced nation in the world where roughly two mass shootings have occurred every month for the past eight years were referring to themselves and their situation as “helpless.”

Once again, a satirical news site has more to say about a national tragedy than many mainstream media outlets.