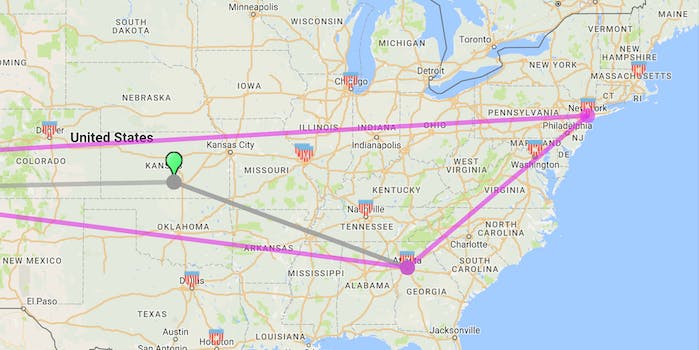 If you’ve ever wondered whether the National Security Agency (NSA) is monitoring your internet activity at any given moment, there’s now an app for that.

Yes, a physical wire. Though we generally think of the internet as a cloud, all of our data travels along large wires and data points before it gets to its destination. Since our data travels through these wires, it’s much easier for the NSA to intercept, track, and store it for whatever means the agency finds necessary.

IXmaps uses traceroutes, a computer network diagnostic tool that tracks the various locations your data passes through before reaching its destination, and shows you if your web traffic passes through one of the NSA’s suspected listening posts. It’s highly likely the NSA has listening posts at buildings in New York and Utah.

Per the U.S. Constitution, U.S. citizens are granted a certain amount of internet privacy. These rights protect citizens from the tyrannical seizure of information collections from internet data. Whether or not those rights are acknowledged in NSA tracking is a different story, though, given the documents leaked by Edward Snowden.

For non-U.S. citizens, though, there’s absolutely no protection and no boundaries for what the NSA can collect. IXmaps is a Canadian project, originally created to help Canadian citizens map their internet data. The Canadian constitution provides similar privacy protections to its citizens.

For financial and political reasons, many Canadian internet routes pass across the border into the U.S.—a phenomenon known as “boomerang routing”—before going back into Canada to its original destination. Since Canadian citizens have no privacy rights in the U.S., their data is often collected and stored without question.

IXmaps recently went public again after undergoing a redesign, and it’s working to expand its maps to across the globe, but that depends on individuals tracking and submitting their own traceroutes to the database.

Correction: An earlier version of this story conflated the wires used to transmit internet data with traceroutes. We regret the error.