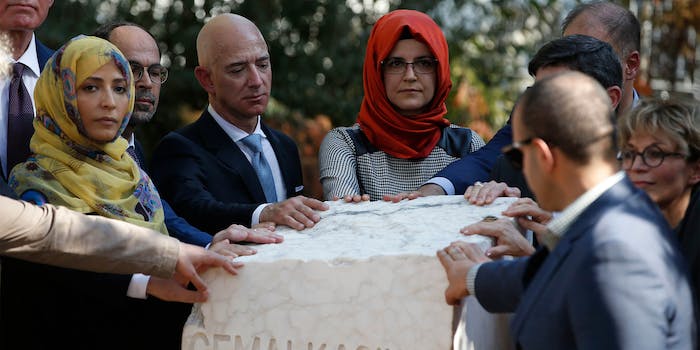 Amazon CEO Jeff Bezos appeared to respond on Twitter Wednesday to reports that his personal cellphone was hacked by Saudi Arabia.

Bezos’ phone, as first revealed by the Guardian, was allegedly targeted with a malicious video file sent over WhatsApp from the account of Saudi Crown Prince Mohammad bin Salman. Forensic analysts say the phone began exfiltrating large amounts of data almost immediately after.

In his first public post since news of the reported hack, Bezos tweeted out the hashtag #Jamal alongside a photo of himself at the memorial service of murdered Washington Post columnist Jamal Khashoggi.

A report from the United Nations released Wednesday suggests that the hack may have been carried out in an attempt to influence reporting on Khashoggi’s death by the Post, which is owned by Bezos. Khashoggi was a Saudi dissident living abroad known for his criticism of the country’s ruling class.

Despite initially denying any knowledge, the country eventually admitted that men working on behalf of Saudi Arabia were responsible for the writer’s death after he went into a consulate in Turkey. While intelligence agencies say bin Salman ordered the hit, Saudi Arabia has blamed Khashoggi’s death solely on the men directly involved.

The Twitter account for the Saudi U.S. embassy denied the allegations on Wednesday that the country’s Crown Prince was involved in the hack of Bezos’ phone.

“Recent media reports that suggest the Kingdom is behind a hacking of Mr. Jeff Bezos’ phone are absurd,” the account said. “We call for an investigation on these claims so that we can have all the facts out.”

Reports also suggest that the hacked data led to the National Enquirer story last year that revealed Bezos was engaged in an extramarital affair based on text messages from his phone.