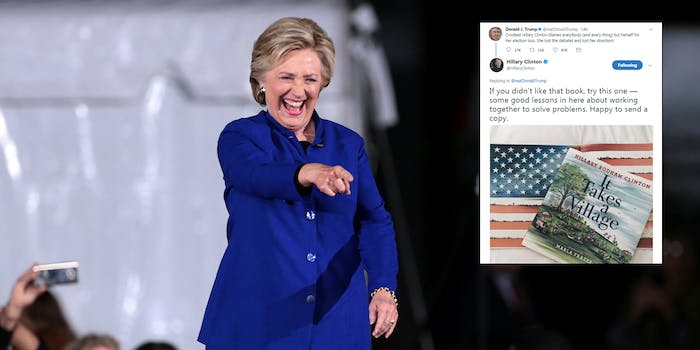 Clinton schools Trump after he attacks her new book

Hillary Clinton is back with a new burn.

Hillary Clinton has been uncharacteristically candid in interviews promoting her new book, What Happened, but one thing that hasn’t been all that different is her ability to fire shots back at President Donald Trump on Twitter.

On Wednesday night, Trump ranted about his former presidential election opponent’s takes on the election in her new book.

“Crooked Hillary Clinton blames everybody (and every thing) but herself for her election loss. She lost the debates and lost her direction!” Trump wrote. “The ‘deplorables’ came back to haunt Hillary. They expressed their feelings loud and clear. She spent big money but, in the end, had no game!”

On Thursday morning, Clinton replied to Trump’s attack. While it wasn’t as snappy as the “delete your account” tweet from the campaign, it was pretty shady.

“If you didn’t like that book, try this one — some good lessons in here about working together to solve problems. Happy to send a copy,” Clinton wrote, attaching a picture of her illustrated children’s book It Takes A Village.

All of us reading Hillary's tweet to Trump pic.twitter.com/Vbd0a8dHwF

@HillaryClinton YOU DID NOT COME TO PLAY DRAG HIM GUUUUUURL!

Clinton’s newest book, which was released earlier this week, touches a lot on the election, from her thoughts on Democratic primary rival Sen. Bernie Sanders (I-V.t.) to the ongoing Russia investigation.