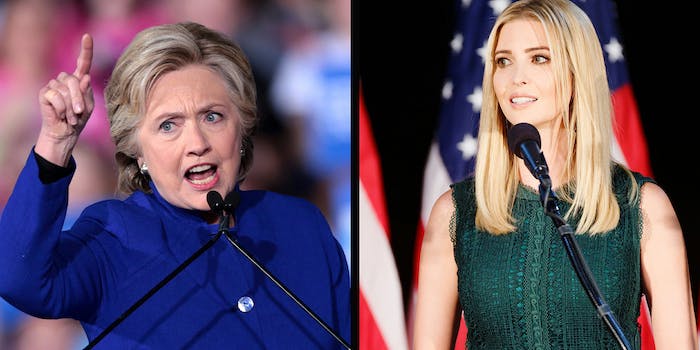 'Everyone associated with him, they’re either on board with that, or they’re not.'

Hillary Clinton thinks Ivanka Trump and other members of President Donald Trump’s administration should be held responsible for the actions he takes in the nation’s highest office.

In an interview with Refinery29 about her new book What Happened, Clinton didn’t mince words when she was asked about the belief that Ivanka Trump, a White House adviser, would be a moderate influence on her father’s more radical agenda.

While Clinton said President Trump needs to be held responsible because he holds the office, she also thought some of the blame rested on people like Ivanka Trump, who are “part of his agenda.”

“Everyone associated with him, they’re either on board with that, or they’re not. And if they’re not, they need to be speaking out or leaving,” she said. “But if they remain silent and just give lip service to contrary points of views, then they are part of his agenda and should be judged and held accountable for that.”

In the interview, Clinton also discusses the sexism Trump has displayed in the past, advice for millennial women and why she decided to open up post-election in her book.

Clinton has been candid in both interviews and the text of What Happened about Trump, her Democratic primary opponent Bernie Sanders, former FBI Director James Comey and the ongoing Russia investigation.

You can see all of Clinton’s interview with Refinery29 here.