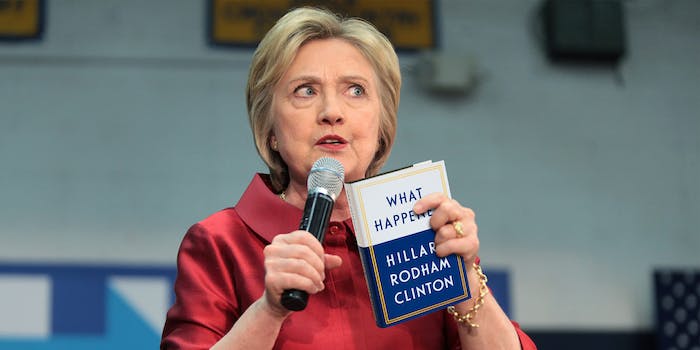 Hillary Clinton's book title brought out the worst of Twitter.

When the title of Hillary Clinton‘s new book debuted last night, it was ripe for roasting. The title, What Happened, sans question mark, comes across as Clinton lecturing America, rife with disdain for the people she’s ostensibly speaking to. But the right is proving exactly why her words are needed with a newfound misogynistic attack nearly nine months after the election.

Throughout the campaign, Hillary Clinton was bashed for her appearance, her demeanor, her physical health, and her mental health. And it’s something that the right can’t get over, despite having bested Clinton for the White House.

The book announcement brought out the worst of misogynistic Twitter, as people continued to try and beat down the candidate they’d already beaten down. Many of the proposed titles refer to the Seth Rich murder conspiracy, the unsubstantiated theory that the Democratic National Committee staffer was killed for leaking emails to WikiLeaks.

Or her regular health.

They also went after her appearance.

The left tried to revive the hashtag with some thoughts of their own.

But a day later, the right’s tweets are still going strong online. The belief that Clinton is a cold, calculated killer was another popular option for titles—which, given the right’s love of Trump and his win-at-all costs attitude—truly does reflect the inherently gendered view of Clinton.

While these are all crude jokes, they do actually point to what did happen. The first woman candidate for president could not overcome the misogyny inherent in patriarchal society.