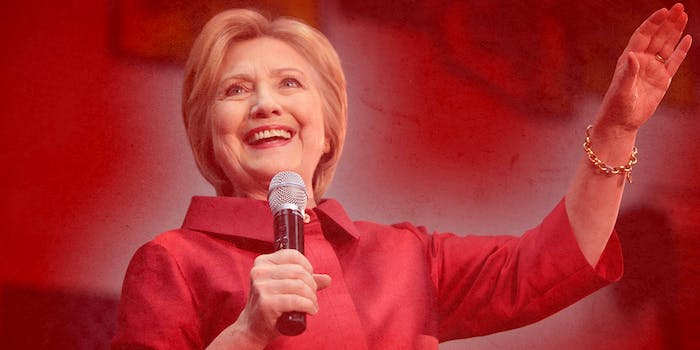 Clinton just burned Trump on his own Twitter turf

Donald Trump has shaken up the conventional wisdom about electoral tactics in his scorched-earth march to become the GOP’s presidential nominee.

Perhaps most baffling to the political establishment is his mastery as a Twitter troll. His tweets are rude, rarely if ever fact-checked, and crafted to dominate news cycles by courting mass outrage. One by one, his Republican rivals were slain by this slimy social media strategy.

But Trump isn’t fighting fellow conservatives anymore. Now he’s up against Hillary Clinton and the entire Democratic machine. Which means that if he’s going to post a half-assed attack tweet like this…

…he’s gonna get hit with Twitter’s favorite, most brutal reply.

In less than 20 minutes, this ice-cold clapback has been retweeted 35,000 times—more than seven times the traction Trump’s tweet got and more than five times the amount of retweets Hillary’s initial announcement of Obama‘s endorsement garnered. The response was overwhelming.

Meanwhile, people not as attuned to the vernacular of this particular platform seemed to believe that Hillary might have been hacked or made the suggestion with the earnest expectation of a possible deletion.

This "delete" suggestion is not likely to happen…but makes for interesting social media reading! https://t.co/SHTyEDS4Po

The Clinton campaign has been dragged in the past for pandering to millennials and minority groups in her quest for the White House, and it’s true that she’s stumbled a bit in efforts to speak the internet’s language. But in this case, some communications staffer deserves a raise.

Update 4:11pm CT, June 9: After a long two hours, Trump managed to fire back at Hillary with a clearly crowdsourced dig.

How long did it take your staff of 823 people to think that up–and where are your 33,000 emails that you deleted? https://t.co/gECLNtQizQ

The answers to those questions would be: “literally five minutes” and “deleted.”

It took 5 minutes. Look at the time stamp you fucking buffoon.

Honestly, do we even need debates? I think we can settle this online.