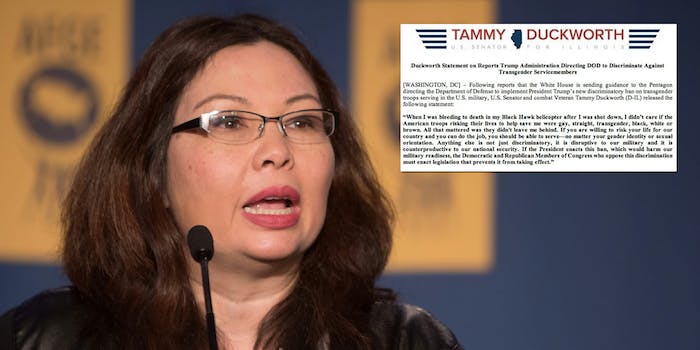 Sen. Tammy Duckworth (D-Ill.), who lost both of her legs while serving in the military, blasted President Donald Trump’s controversial ban on transgender service members in an emotional statement released on Thursday.

Duckworth, who served in Iraq and received a Purple Heart for her service, called Trump’s transgender military ban “discriminatory.”

“When I was bleeding to death in my Black Hawk helicopter after I was shot down, I didn’t care if the American troops risking their lives to help save me were gay, straight, transgender, black, white, or brown,” Duckworth said. “All that mattered was they didn’t leave me behind. If you are willing to risk your life for our country and you can do the job, you should be able to serve—no matter your gender identity or sexual orientation.”

Duckworth called the ban “disruptive” to the military and “counter productive” to national security. At the end of her statement, Duckworth called on Congress to act against the president’s ban.

“If the President enacts this ban, which would harm our military readiness, the Democratic and Republican members of Congress who oppose this discrimination must enact legislation that prevents it from taking effect,” she said.

When I was bleeding to death in my Black Hawk, I didn’t care if the troops saving me were gay, straight, transgender, black, white or brown pic.twitter.com/FTzjHpZuuH

The Trump administration’s guidance on the transgender ban would request the military stop accepting trans troops and end payments for any trans service members medical care, such as gender confirmation surgery.

It is expected that the Defense Department will have six months to officially implement Trump’s transgender military ban. Trump originally said that “tremendous medical costs” were his reason for implementing a ban, despite his frequent trips to Mar-a-Lago costing more than the military spends on transgender service members.