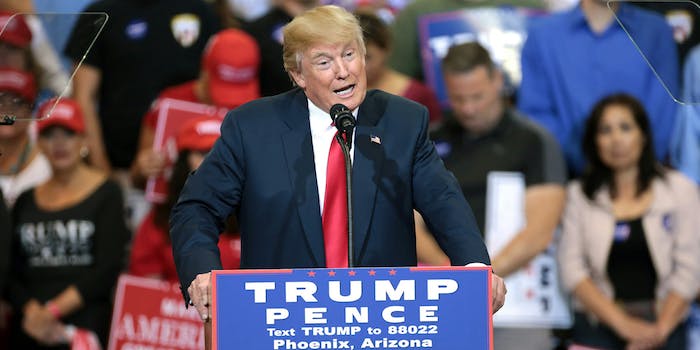 The Pentagon's own numbers show the cost is 'exceedingly small.'

President Donald Trump on Wednesday said the military will no longer allow transgender individuals to serve in the United States military due to “tremendous medical costs.”

“After consultation with my Generals and military experts, please be advised that the United States Government will not accept or allow transgender individuals to serve in any capacity in the U.S. Military,” Trump wrote on Twitter. “Our military must be focused on decisive and overwhelming victory and cannot be burdened with the tremendous medical costs and disruption that transgender in the military would entail.”

The RAND Corporation, a research organization that helps craft public policy, worked with the Department of Defense last year to review its policy on allowing transgender personnel to serve in the military and receive treatment during their military service.

To put this in perspective, Trump’s trips to his Mar-a-Lago resort in Florida are estimated to have cost taxpayers $21.6 million during the first 80 days of his presidency. Further, an analysis by the Military Times concluded that the Pentagon spends $84 million annually on erectile dysfunction medication like Viagra—at least 10 times the healthcare costs associated with transgender service members.

“This represents an exceedingly small proportion of active component health care expenditures,” RAND wrote in the report. RAND added: “Even upper-bound estimates indicate that less than 0.1 percent of the total force would seek transition-related care that could disrupt their ability to deploy.”

The DoD’s entire fiscal year 2017 budget is $582.7 billion. Trump has called for significant increases in the 2018 budget.

“Only a small portion of service members would likely seek gender transition-related medical treatments that would affect their deployability or health care costs,” Agnes Gereben Schaefer, lead author of the study and a senior political scientist at RAND, said at the time.

The DoD transgender policy allowed transgender service members to serve openly and specified that they could not be separated or discharged from the military solely for being transgender individuals. It was enacted last year.

The DoD originally planned to begin accepting new transgender recruits on July 1, but the effort was delayed until Jan. 1, 2017, at the request of the Joint Chiefs of Staff, which said the military needed more time to assess the policy. However, Defense Secretary said in a memo that the delay “in no way presupposes an outcome.”

“Since becoming the secretary of defense, I have emphasized that the Department of Defense must measure each policy decision against one critical standard: Will the decision affect the readiness and lethality of the force?” Mattis said. “Put another way, how will the decision affect the ability of America’s military to defend the nation? It is against this standard that I provide the following guidance on the way forward in accessing transgender individuals into the military Services.”

Members of the Joint Chiefs have said that transgender service members currently serving in the military are not an issue.

Ultimately, Trump’s decision appears to have been a political ploy rather than a move to protect the effectiveness of the U.S. military, according to a Trump administration official.