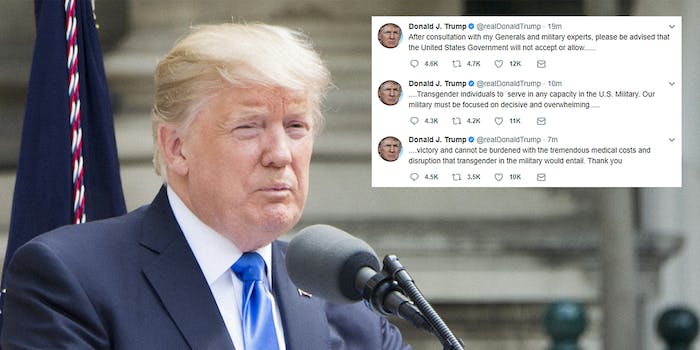 Trump bans transgender people from serving in the military

The president argues that trans troops would be a 'burden' and 'disruption' to the armed forces.

President Donald Trump announced on Twitter today that transgender individuals will be banned from serving in the United States military.

In a tweet chain, Trump claimed that the U.S. armed forces would be “burdened” from “medical costs” and “disruption” if the armed services continued to enlist transgender service members.

“After consultation with my Generals and military experts, please be advised that the United States Government will not accept or allow transgender individuals to serve in any capacity in the U.S. Military,” Trump wrote on Twitter Wednesday morning. “Our military must be focused on decisive and overwhelming victory and cannot be burdened with the tremendous medical costs and disruption that transgender in the military would entail.”

After consultation with my Generals and military experts, please be advised that the United States Government will not accept or allow……

….Transgender individuals to serve in any capacity in the U.S. Military. Our military must be focused on decisive and overwhelming…..

The Pentagon has not made an official comment about the ban as of this publishing. Defense Secretary James Mattis’s opinion on the issue also remains unknown. Defense reporter Jacqueline Klimas noted that Sec. Mattis is currently on vacation.

A quick reminder that SecDef Mattis is on vacation. Pentagon said Monday that he's on "personal travel" this week.

When Axios’s Jonathan Swan reached out to the Trump administration for clarification on the transgender ban, an official responded by focusing on the 2018 Congressional elections.

“This forces Democrats in Rust Belt states like Ohio, Michigan, and Wisconsin, to take complete ownership of this issue,” the official stated. “How will the blue collar voters in these states respond when senators up for re-election in 2018 like Debbie Stabenow are forced to make their opposition to this a key plank of their campaigns?”

The National Center for Transgender Equality has since released an official statement criticizing the president, calling his tweets “an egregious attack… on transgender service members.” The center estimates that approximately 15,000 transgender people serve in the military. It remains unclear what the Trump administration will do to manage these troops amid the ban.

“This is worse than don’t ask don’t tell, this is don’t serve, don’t serve. This is an appalling attack on our service members; it is about bigotry rather than military readiness, reason or science. It is indefensible and cannot stand,” the center’s executive director, Mara Keisling, said in the statement.

Initially, the Obama administration’s Defense Department created guidelines for including transgender troops within the U.S. armed forces. According to a special report by the department, transgender service members were originally slated to enter the U.S. military by July 1. That process had previously stalled under President Trump, with a six-month delay on transgender inclusion announced earlier this summer.

LGBTQ activists have criticized the president for his decision, arguing that the ban fosters discrimination against trans people and is based on outdated ideas of gender.

The Transgender suicide rate is 40%. I can't imagine how hard it must be for someone who is transgender to read Donald Trump's tweets today.

"BREAKING: Trump: Transgender people will not be allowed to serve `in any capacity' in the US military." ODIOUS OGRE.

We will update as more official policy information comes to light.